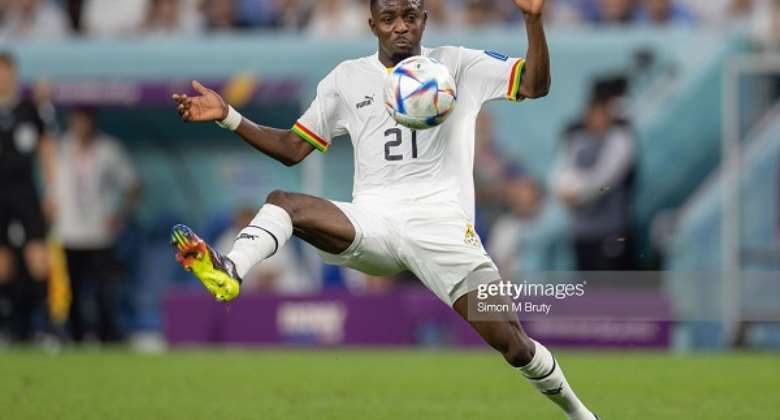 Black Stars' talented midfielder Salis Abdul Samed is excited at the opportunity to represent Ghana at the FIFA World Cup in Qatar and believes Ghana can pick many positives from the nation's campaign and build upon them for the future in spite of the team’s early elimination.

The 22-year-old believes the young team have a bright future if the current squad could be maintained to continue with the team building as the competition has taught him and his teammates a lot of lessons to grow together.

Samed is in no doubt that the current Black Stars have quality players to become more successful but maintains that the young team need mental toughness as part of their development.

The RC Lens star, who was one of the brightest spots in Coach Otto Addo’s team, told Daily Graphic in an exclusive interview that lack of experience at major competitions and limited playing time together as a group worked against their collective goal to go past the group stage

Nonetheless, Samed believed he did enough in the four games he had played for Ghana over the last four weeks to win the confidence of his coach and Ghanaians.

On the back of his impressive performance for French Ligue 1 side, RC Lens, Samed merited a place in Ghana’s final squad at the last minute and brought qualities previously lacking in the team. However, for the player, virtually walking into the national team and immediately commanding a starting role in the World Cup was a bit of a surprise and might have come earlier than expected.

“I didn’t know I would even start. I was working hard in my team hoping that one day I would get a call-up because it’s everyone’s dream to play for his national team. So I’ve been working hard to come here and prove my qualities and what I can bring to the team,” he said.

At the club level, Samed has been awesome this season, playing 15 consecutive matches for Lens for full 90 minutes, but he was yet to be tested in the national team. That he made it into Coach Otto Addo’s final 26-man squad before making his first appearance for Ghana speaks volumes of the player’s quality.

For the outgoing Ghana coach, the misfortune of losing his trusted defensive midfielder, Baba Iddrisu, just a week before naming his final squad was a blessing in disguise as it opened the door for Samed, who made his Ghana debut against Switzerland in an international friendly in Abu Dhabi, just a week ahead of the team’s opening group clash with Portugal at Stadium 974. He seized his moment in the friendly to become a mainstay in the team.

A week later, Salis was in the starting line-up against Portugal where he formed a strong midfield partnership with Thomas Partey and provided limited opportunities for the skilful Portuguese players and is now looking for a brighter, long-term stint with the national team.

“It was a good experience for us. We learnt many things from it [World Cup]. We don’t know one another much but if we continue to keep this group we will get better,” he told Daily Graphic at the team’s Double Tree Hilton Hotel in Al Sadd, Doha.

In the starting line-up in all three group games, Samed looked unruffled and played with the calmness of a veteran in the team, with the Ghana coach falling on his combative style, ball interception and breaking-up play to give the team a solid spine in midfield.

After Ghana’s 3-2 win over South Korea, the coach extolled his qualities and why he was an important member of the team despite his late arrival.

“Samed with his ball-winning, one-on-one abilities defensively, very good and calm on the ball, support his teammates and gives everything for 90 minutes. This is the type of player we are looking for and we are happy to have him here,” the Ghana coach told the media.

Coach Addo indicated that Salis was very confident and was under no pressure in all the matches, including when Ghana missed a penalty against Uruguay and for a moment allowed their opponents to hit them twice and never allowed the Ghanaians to recover in the 0-2 loss at the Al Janoub Stadium last Friday.

That loss and the whole campaign provided very useful lessons for the youngster, who upon reflection, said the team needed to be more compact in defence and play together a lot more to become a solid side for the future.

“In defence, we were solid but we need to be more solid and aggressive, and the attacking should be more so we can create more scoring chances.

“We need to work together and be more compact when we’re defending and help each other as we did against Portugal -- the first half they got zero chance, but scored in the second half through counter-attacks when we had more spaces between us.

“We’ve learnt from this tournament,” he noted.

Beyond the defensive gaps they need to work on, the intelligent midfielder identified the lack of concentration and strong mentality as Ghana’s other shortcomings in Qatar, especially in their last two matches, which the team must work on individually and collectively.

“He [Andre Ayew] missed a penalty; every great player misses a penalty because Lionel Messi has missed two penalties at the last two World Cups. But it was still 0-0 so we could have continued to do what we were doing but somehow we allowed our heads to drop a bit. We did the same thing against Korea and conceded two goals.

“We need to concentrate and fight from start to the end even if the scoreline is not in our favour,” he observed.

The youngster’s rise to the top has been very fast. Two years ago he moved from Abidjan-based JHMG Academy to French second-tier side, Clermont-Foot, on loan until his deal was made permanent last season.