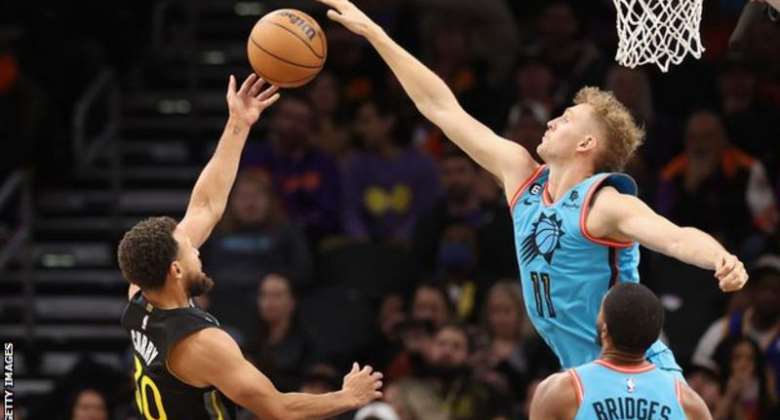 Curry is an eight-time NBA All Star

Stephen Curry scored 24 points as the Golden State Warriors continued their fine form at home with a 111-101 victory over the New York Knicks on Friday.

Curry completed a double-double and a game-high 10 assists, while Klay Thompson and Andrew Wiggins scored 20.

The Warriors have a 7-1 home record but are winless in eight on the road.

Elsewhere on Friday, the Boston Celtics extended their winning run to nine with a 117-109 victory over the New Orleans Pelicans, with Jaylen Brown and Jayson Tatum both scoring double-doubles.

In Dallas Mavericks' 127-99 win against the Denver Nuggets, guard Luka Doncic recorded his 50th career triple-double in his 279th game.

Doncic becomes just the 10th NBA player to reach 50 triple-doubles and he is the second youngest (23 years 263 days) and second fastest (278 games) to reach the milestone behind Oscar Robertson (23 years 42 days; 111 games).

The Los Angeles Lakers secured just their fourth win of the season as Anthony Davis scored 38 points in a 128-121 home victory over the Detroit Pistons.