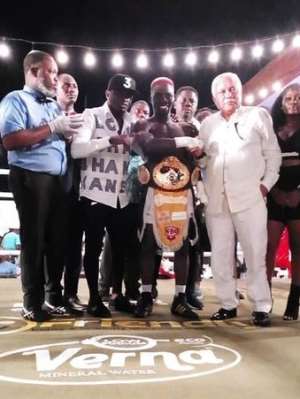 Though Quaye was not impressive on the night, his opponent was not dominant enough, and the champion.

It was a close and cagy bout, which saw Oto throwing wide ferocious punches and often warned by the referee for fouls, but Quaye displayed tactical discipline issued by his coach Carl Lokko,

The well-attended free event, put together by Swavy Blu Promotions with support from Bronx Promotions was sponsored by Dezone, Friendly Mall, and Golden Beach Hotel aka Royal Dede Resort.

In the supporting bouts, Jacob Nettey Laryea from the Bronx Gym stopped Moses Lartey of Stadium Gym in a Super Welterweight clash.

Alidu Suleman aka Dynamite of Black Panthers Gym knocked out Raymond Ansah of Ultimate Gym in another Super Welterweight bout.

Gabriel Adoku of Chorkor Gym could not appear to face Issah Inusah of Attoh Quarshie, however, last Sunday was an entertaining night with an acrobatic performance by Great Victory and the dance group of the African Lion, Isaac Allotey.