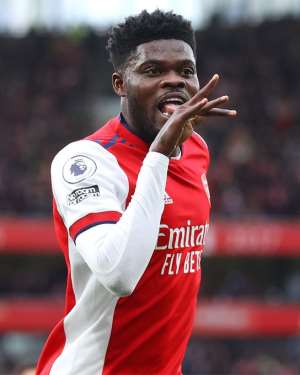 Ghana international, Thomas Partey displayed fine form on Saturday morning when he featured for Arsenal in the London derby against Tottenham Hotspur.

The Gunners today hosted Spurs at the Emirates Stadium in a matchday eight encounter of the 2022/23 English Premier League season.

In a game where the fit-again Thomas Partey started for the home team, he needed just 20 minutes to open the scoring.

The Black Stars midfielder received a pass from defender Ben White outside the Tottenham Hotspur box and opted to fire a first-time shot.

The thunderbolt strike from the midfield enforcer flew into the back of the net of the away team as the home fans went crazy.

Going on to boss the midfield for Arsenal for 73 minutes before he was substituted, Thomas Partey finished the game with a high rating of 7.9.

At the end of a game that produced four goals, Arsenal finished on the winning side.

Goals from Gabriel Jesus and Granit Xhaka propelled the home team to a 3-1 victory as Harry Kane equalized from the spot to give Spurs a consolation.