Kotoko Vs Hearts: Samuel Boadu To Be Sacked Or Nana Yaw Amponsah To Resign? 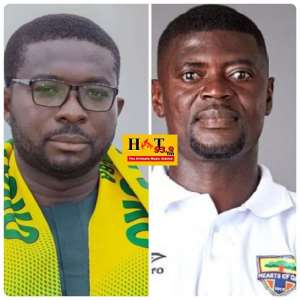 Pressure is mounting on Accra Hearts of Oak’s Coach Samuel Boadu, and the CEO of Asante Kotoko ,Nana Yaw Amponsah as a loss from their GPL super Clash today at the Babayara Sports Stadium today wouldn’t rescue any of them from being sacked.

Kotoko will begin this season’s league against Hearts today after their CAF Champions league humiliating performance a week ago.

The porcupine warriors were eliminated from the first round by Burkinabé football Club , RC Kadiogo.

Hearts of Oak also need a win bitterly after only amassing a point from their two GPL games. Both teams have come under tumultuous public backlashes over their abysmal performances.

While the Phobian fans are calling for the sack of their coach Samuel Boadu, angry supporters of Kotoko are also calling on their CEO to resign.

To the Hearts of Oak fans, the Board Chairman of the team, Togbe Afede XIV, has made transcendent recruitment for the team, but Coach Samuel Boadu’s deplorable tactics are the major cause of the team’s horrid performances.

Fans of Kotoko also believe Nana Yaw Amponsah has become more of a player agent than his role as the CEO of the team.

According to them, he lacks the managerial expertise needed to manage a team like Asante Kotoko.

Hotfmghana.com is reliably informed that a loss from any of the teams on Sunday would not rescue Samuel Boadu from being sacked or Nana Yaw Amponsah from resigning.

Who becomes the Villain? Who goes home in Shame?