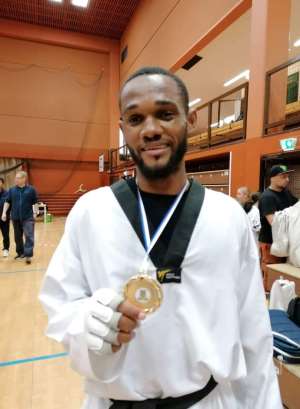 Selasi Damalie, a Ghanaian national male athlete has made the country proud by winning a gold medal at the 2nd edition of the Finnish Taekwondo league on April 23, 2022.

Held at the Ikaalinen, the 5 series league which is likened to a Taekwondo grand prix saw Selasi go past Miro 13-10 in the semis before defeating Mikko by 26-16 in the finals of the -68kg category.

Having been in Finland since October 2021 for Studies and Taekwondo, Selasi who has been to 4 international camps with Olympian coaches competed against 2 of the top 4 athletes in the -68kg.

He missed the first series of the league due to a hamstring injury but is poised to make Ghana proud again at the upcoming 2022 African Taekwondo Championships in Kigali-Rwanda, come July and also the 2023 African Games.

“There are several competitions I will be competing in Finland and Europe. In Europe, I will be competing in 6-8 G2 championships this year. I will continue pursuing the Finnish League competitions till the end of the year. I will also participate in 2 training camps outside Finland. My goal is to continue to compete for Ghana in international championships globally.”

The Finnish Taekwondo League is the highest level of Taekwondo competition in Finland and it has produced elite fighters for the Finnish National team and the Olympics.