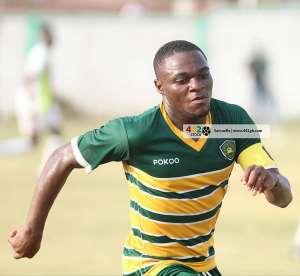 The Dwarfs captain signed a four-year deal with the Phobians.

Dennis Korsah over the years has excelled on the local scene where he had given his all to relegated Ebusua Dwarfs.

He is now in Accra and set to open a new chapter of his career with giants Hearts of Oak.

At his new club, he will be expected to give the Rainbow club a major squad boost as they aim to win the Ghana Premier League and MTN FA Cup titles this season as well.

Hearts of Oak have had a poor start to the ongoing football season under Samuel Boadu, sitting 6th on the league log with 20 points after 12 matches played with a game at hand against Asante Kotoko.