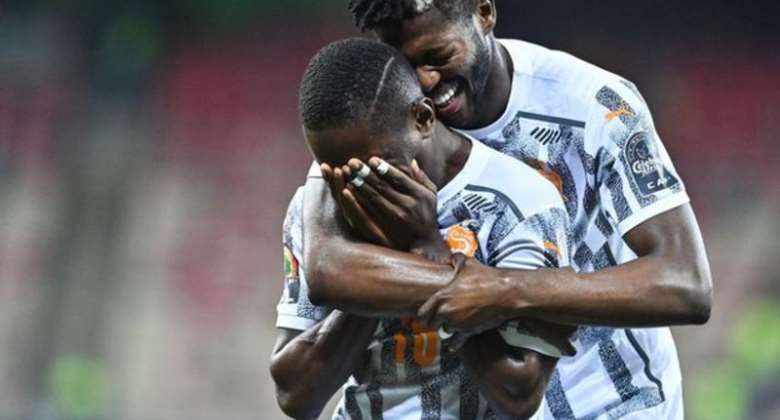 Gradel, whose strike settled the Group E tie 1-0, was unable to travel to his father's funeral on 8 January because of Covid-related complications.

"It's a mix of emotion and joy at the same time," the Ivorian captain told BBC Sport Africa of his goal.

"I am very happy to have scored for my father, the whole Ivory Coast and all Ivorians."

"I want to say thank you to them for the support they gave me as well as my teammates who supported me during these difficult moments."

Former Leeds and Bournemouth forward Gradel had asked Ivorians to represent him at his father's funeral, which he could not attend given he was in a training camp in Saudi Arabia prior to flying to Cameroon for the Nations Cup.

He marked Ivory Coast's opener by scoring a spectacular winner after just five minutes, lashing in from 20 yards with the outside of his right foot, on Wednesday night in Douala.

"I'm very happy for him. He deserves it, he is a fantastic guy, fantastic teammate, fantastic player. I'm very glad to have such a player in my squad and I love my players."

Ivory Coast play next on Sunday when they face a Sierra Leone side who held defending champions Algeria to a goalless draw in both sides' opener.

Group E is likely to be won by either the North Africans, who have one point and are currently on a 35-game unbeaten run, or the Ivorians, who have three and last won the trophy in 2015.

The Elephants finish their campaign against Algeria themselves in Douala on 20 January, in a tie likely to decide the group winner.

Former national captain Didier Drogba was cheered by what he saw in light of recent Covid-enforced complications.

"It was a good start from Ivory Coast and a good game, knowing that the team didn't play any friendly games," said the former Chelsea star.

"Three weeks without competition [before your opener] is really difficult, so it was important to take the three points to continue and progress."

Meanwhile, Beaumelle was delighted to have a squad unscathed by injury or Covid, which is in contrast to many sides that have struggled to name a full squad for matches.

Tournament regulations state that sides hit by Covid must play if they have at least 11 players fit, even if none of those individuals is a goalkeeper.

"I'm very happy with the three points - no injury, I have all my squad and hopefully we can stay far away from Covid for the second game," he said.

"We can prepare the second game with a lot of confidence and improve from [this game]. It's a lot of concentration, determination and maybe more consistency in the finishing."