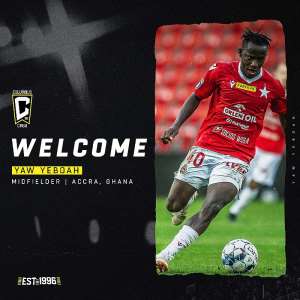 The exciting attacker has been signed from Polish side Wisla Krakow and is now set to play with his compatriot, Jonathan Mensah.

“The 24-year-old will officially be added to the Black & Gold roster pending receipt of his International Transfer Certificate and P-1 Visa and will occupy an international roster slot on the Crew's roster. His contract with the Club will run through the 2024 season with an option for 2025,” an official statement from Columbus Crew said on Thursday evening.

Yaw Yeboah in August 2020 joined Wisla Krakow from Spanish outfit Numancia. During his spell in the Polish Ekstraklasa, he made 50 appearances where he scored 10 goals and provided five assists.