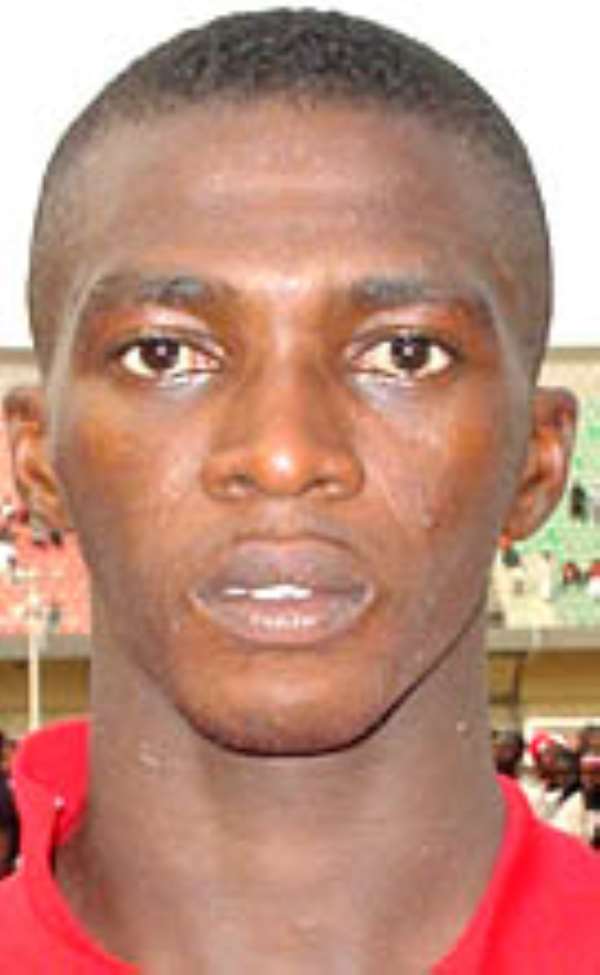 PREMIER football side, King Faisal, have given Kumasi Asante Kotoko another option for the ownership of forward player, Alhassan Yusif Chibsah, saying they will now accept a fee of ¢200million in addition to two other Kotoko players.Altering the lines in their battle with Kotoko over the player, King Faisal founder, Alhaji Karim Grunsah, said in addition to the ¢200million his club will demand the free transfer of Godwin Ablordey and Nana Frimpong from Kotoko as a condition for the release of Chibsah. Alhaji Grunsah said in line with Kotoko’s own current style, with regards to Charles Taylor and Chibsah, the two Kotoko players have also started training with King Faisal. Elaborating further, Alhaji Grunsah said his formula for player swap would also include a clause to guarantee Kotoko a 40 per cent share in the event of only Nana Frimpong earning a foreign contract. No such thing would apply to Ablordey. The fight for Chibsah has raged since last March when Kotoko requested King Faisal to loan them the player for the LG Top 4 competition.In a letter dated March 7, 2003, Kotoko undertook to negotiate for the release of the player in the event of any injury being caused to the player in the LG Top 4 competition.Kotoko won the competition in which Chibsah played a key role. He sustained no injury, but King Faisal’s request for his return produced the raging tug-of-war. Grunsah’s anger at Kotoko’s behaviour is fuelled by the fact that efforts by King Faisal to earn a foreign contract for the player has yielded a lucrative deal with Italian side Brescia F.C., for whom Ghanaian player Stephen Appiah also features Brescia has even applied for a visa for the player, saying he will reside at Montirone in Via Palazzo during his stay in Italy. Alhaji Grunsah said it is in Kotoko’s interest to respond positively to his latest suggestion as any further delay, with the premier league so close, would not advance Kotoko’s interest. ...BUT KOTOKO CALLS IT A BLUFF A MEMBER of the IMC of Kotoko, Mr. George Ayisi Boateng, has described as utter lies claims by Alhaji Grunsah that Nana Frimpong and Godwin Ablordey are currently in his camp. Speaking in an interview with the Graphic Sports yesterday, Mr. Ayisi Boateng who is the IMC member in-charge of operations said all that Alhaji Grunsah has set out to do is to play a psychological game to destabilise the front of Kotoko as it gears up for the challenge of winning the 2003 league.

He disclosed that he personally met Nana Frimpong at 9a.m. yesterday in the presence of two journalists who had gone to his office for an interview and the player strongly voiced his disapproval of the unfortunate football politics Alhaji Grunsah has been trying to drag him into.

The IMC member was emphatic that skipper Godwin Ablordey is also with his colleagues in Kotoko and is equally resentful of the mind game Alhaji Grunsah is playing with him and Nana Frimpong.

In another development, the IMC of Kotoko has paid ¢50 million to the management of Obuasi Goldfields to cover the cost of damage some supporters of Goldfields suffered during a violent league match between the clubs at the Kumasi Stadium in the latter part of last year.

A Kotoko delegation comprising three IMC members - Nana Yaw Owusu, Mr. Ayisi Boateng and Kwadwo Nyantakyi - and Malik Jabir, Technical Director of the club, travelled to Obuasi last weekend to present the money to the Chief Executive of Goldfields, Mr. Andy Sam, and the National Chairman of the SHAFTS, the supporters union of Goldfields.

Mr. Sam expressed his club’s appreciation to the IMC for the gesture.

The incident took place during the Herbert Mensah administration.The two parties affirmed that a new bridge had been built between the two clubs and stressed the need for it to be sustained.In a phone-in programme later on Shaft FM owned by Ashanti Goldfields Company, callers generally lauded the good neighbourliness that has been forged between the IMC and the Goldfields management, Mr. Ayisi Boateng revealed.