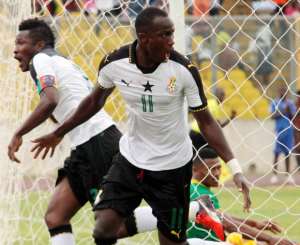 Ghana striker, Raphael Dwamena has reiterated his desire to continue playing football despite encountering a cardiac arrest in Austria recently.

The enterprising forward has dominated the headlines due to his recurring heart issues in the last few years.

Dwamena has been playing with an implanted defibrillator since 2020.

The 27-year-old collapsed on the field during BW Linz’s Austrian Cup game against TSV Hartberg last month, forcing the game to be abandoned.

However, the striker has spoken for the first since the incident and has reiterated his desire to continue with football despite calls for him to hang up his boots and move on from the sport.

“I received an electric shock from the defibrillator. It hurts and knocks you off your feet. But I didn’t collapse,” the forward said in an interview, according to Ghanasoccernet.

“I want to have another check done in the next few days or weeks. If everything is okay, I’ll be back on the pitch and play. I’ve always played without any problems.”

Dwamena is however aware the decision to continue playing will not be solely his choice as the doctors will have to give him the green light to do so.

“Now there has just been an incident. But I can’t do it myself decide,” he added.

Following the incident two weeks ago, doctors said Dwamena was never in acute danger to life due to the defibrillator.

Dwamena has made just three appearances for the club in the ongoing season, after joining as a free agent in the summer.