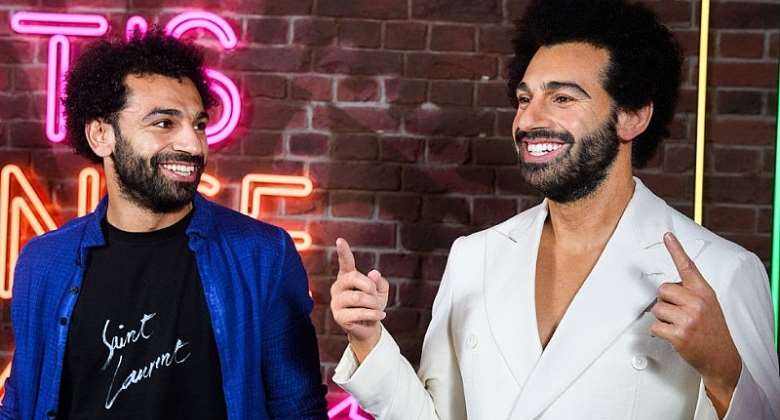 Liverpool star Mohamed Salah has described his waxwork doppelganger as "a blessing".

Hundreds of measurements and photographs of the 29-year-old were taken to ensure the figure was match-ready.

Salah said it was "like looking at my own reflection in a mirror" when he saw the waxwork at Madame Tussauds London.

The Egyptian forward was described as "the best" player in the world by his manager Jurgen Klopp at the weekend.

Salah has lit up English football since he arrived at Liverpool in 2017, breaking the Premier League record for goals in a 38-game season with 32 during the 2017-18 campaign.

Since then he has helped the club win its sixth Champions League trophy, along with its first Premier League title.

Image caption: Salah is now Liverpool's record goalscorer in the Champions League with 31 goals, one more than Steven Gerrard

Salah said it was a "blessing to be recognised and immortalised" with the waxwork.

"I couldn't believe it when I stood alongside 'me', it's like looking at my own reflection in a mirror. I can't wait to see what the fans think," he said.

Salah's doppelganger is wearing the cream suit he wore on the front cover of GQ Middle East magazine and is pointing upwards in recognition of his goal celebration.

Tim Waters, general manager at Madame Tussauds London, said Salah was "one of the game's greats, arguably the best in the world right now, and incredibly deserving of a figure".

"We're sure a lot of people would have expected to see Mo's figure styled in his Liverpool kit, but we really wanted to mark his international superstar status," he added.

Fans will be able to see the waxwork from Saturday.

Salah's two goals against Atletico Madrid in the Champions League on Tuesday meant he became the first player in Liverpool's history to score in nine consecutive appearances in all competitions.