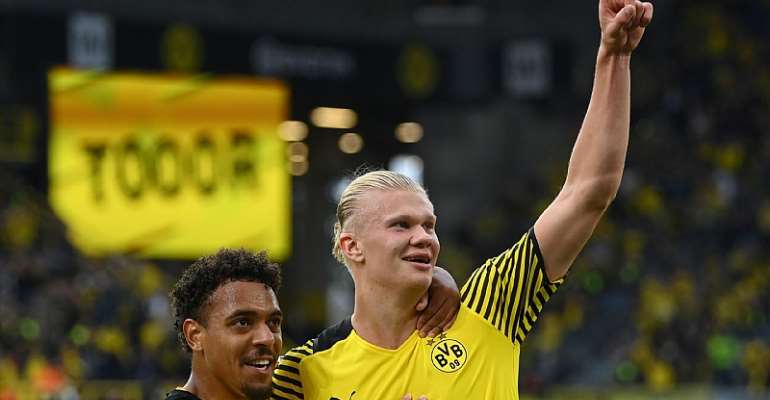 Raphael Guerreiro set the early tempo with a splendid effort from an improbable angle with just eight minutes on the clock.

Fresh from netting in the 2-1 victory over Besiktas on Wednesday night, Haaland doubled Dortmund's advantage with a bullet header to give them a comfortable lead at the break.

Seven minutes after the restart, Dortmund scored their third. The brilliant Jude Bellingham found Marco Reus on the overlap and his cross was turned into his own net by former Schalke defender Marvin Friedrich.

Despite being outplayed, Union Berlin were handed a lifeline with more than half an hour still to play when Max Kruse converted from the penalty spot after Alex Witsel fouled Kevin Behrens.

Substitute Andreas Voglsammer's header reduced the deficit further in the 81st-minute to leave Dortmund nerves jangling, but Haaland - with his seventh league of the season - made sure of the points with a magical lob that will be played on repeat for weeks to come.

Marco Reus struck the post with a free-kick as Dortmund finished with a flourish and Haaland almost sealed his hat-trick in the most spectacular backheeled volley that deflected just wide.

The victory means Dortmund have recorded 13 points from a possible 16 - just one behind Bayern Munich.

Latest Photo Reports
Catch up with all the political quotes from our politicians.
Advertise here
More Football News
ModernGhana Links
Ghana’s Majeed Ashimeru excited after scoring first goal of the season for Anderlecht
African players in Europe: Salah's historic Old Trafford hat-trick
Mohammed Polo speaks on how Milovan Rajevac can qualify Black Stars for 2022 WC
Callum Hudson Odoi aiming to keep his place in Chelsea XI after impressing against Norwich
Ronaldo reacts after Manchester United mauling against Liverpool
I do believe in myself, Solskjaer says after Liverpool humiliation
Growing influence of Ghana’s ‘diasporan’ stars
Caf Confederations Cup: Hearts of Oak to know opponent on Tuesday
'Samuel Boadu will answer some questions' - Hearts of Oak board member speaks after 6-1 demolishing against WAC
TOP STORIES