Tokyo 2020: I am focused and determined for gold, says Samuel Takyi 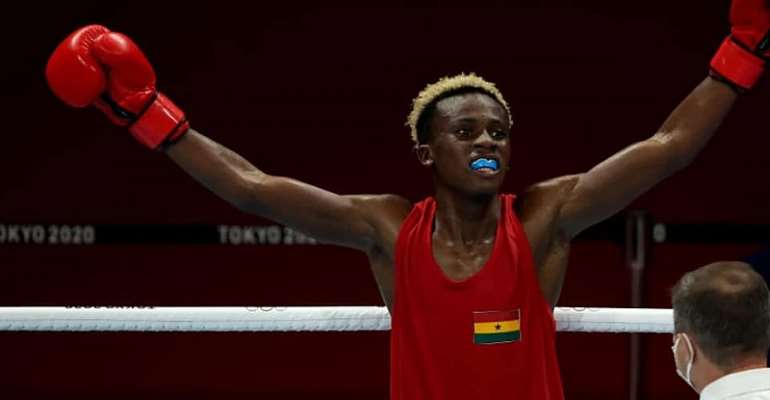 Ghana’s only survivor in the boxing competition at the 2020 Olympic Games, Samuel Takyi aka ‘The Golden Ring Warrior’ has disclosed that he came for four fights and God has listened to his prayers, and he is not letting anything change his ambition of winning a gold medal.

“I am the best in the world at the 57kg,” he told this portal at the start of the tournament, and he has believed in himself to the medal zone.

The Black Bombers coach describes him as the most talented and skilful in the team but has not yet shown what he is made of, however, he will exhibit it at the semis and finals.

The Accra-born Bomber had it quite rough and tough against 32-year-old Colombian Ceiber David Avila in the quarter-final and had to fight hard to gain a 3:2 victory.

The twenty-year-old Samuel Takyi ended Ghana many years wait for an Olympic medal with a strong-willed come-from-behind to win at the Kokugikan Arena to bring back smiles to the faces of Ghanaians as the has already lost two boxers.

Rambling the 32-year old Colombian on all the judge’s scorecards going into the last round, Takyi displayed capability and spirit beyond his era to pound the two-time Olympian.

By reaching the semi-final stage, ‘Golden Ring Warrior’ is assured at least a bronze medal.

He began the quarter-final bout with some difficulty as the veteran Colombian boxer, Ávila Ceiber came out blazing from all angles and won the first two rounds.

Takyi came better in the second round and proved to be a real warrior in the third round to win on the cards of all the judges.

He cleverly used his reach and height advantage and pressured his older opponent who got tired and could not come forward as he did in the initial rounds.

According to Takyi, he listened to his corner, and really thank Coach Dr Asare for helping him to reach the best four.

He promised to beat his next opponent in the ‘masters zone’.

A win against Duke Ragan of the USA on Tuesday at 2.30am in the Semi-Final will give him his first medal at his first Olympics.

Before coming to Japan, he defeated Africa’s number one in Dakar.

His victory sent people in his community in Atukpai going gay, chanting war and victory songs.

Meanwhile, Australia based Issa Issaka aka ‘Hard One Lee’ who discovered his talent called Yours Truly to wish him congratulations and success in his next fights.