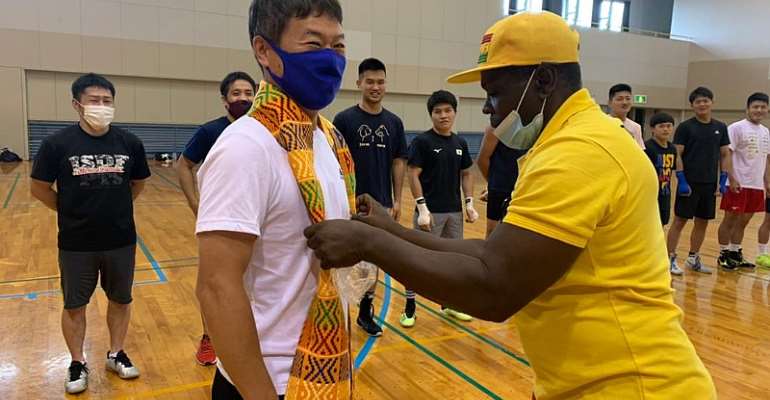 The Black Bombers of Ghana led by coach Dr Akwasi Ofori Asare have presented Golden Tree chocolates made in Ghana and stoles to the Japanese boxing team after they sparred with them in Inawashiro.

Stoles, long scarfs or shawls worn loosely over the shoulders were also given to the Japanese.

According to Asare, this is what they have been doing over the years to established cordial relations with other boxing teams.

He is it is to show love and friendship, apart from marketing the nation’s popular brand and presenting a nourishing product.

The experienced technical handler said he received a request from the coach of the boxing team of the host nation of the 2020 Tokyo Olympic Games which he could not refuse.

He revealed that the sparring exercise was good in accessing the current form of his boxers who proved that they are ready for the tournament.

“We accepted the request because as the host nation, they would have something to share with us, so we gladly accepted the opportunity to access our boxers readiness and it was worthwhile,” he said.

The technical director of the Bombers noted that while his counterpart was studying his team, he also took many lessons on the mistakes of his boys which he hopes to correct and sharpen before the Games begin.

The Japanese team commended the Black Bombers and showed appreciation.

The 2020 Olympic Games which was postponed to 2021 starts from July 23 to August 8 and the Black Bombers will begin their boxing matches from July 24, with sensational Samuel Takyi.