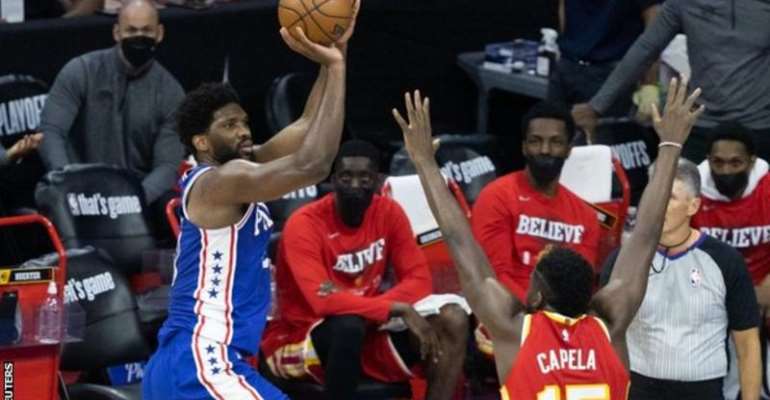 Joel Embiid had a play-off career-high 40 points as the Philadelphia 76ers levelled their Eastern Conference semi-final series with the Atlanta Hawks.

Earlier on Tuesday, Embiid came second to Nikola Jokic in voting for the NBA's Most Valuable Player for 2020-21.

And the Utah Jazz, the number one seed for the play-offs, opened their Western Conference semi-final by edging a 112-109 win over the Los Angeles Clippers.

Embiid (meniscus) was again a doubt heading into Tuesday's game with the Hawks but the Sixers centre added 13 rebounds to his game-high 40 points.

The Hawks, for whom Trae Young and Danilo Gallinari scored 21 points, trailed 57-55 at half-time and took their first lead at 80-79 late in the third quarter.

But the Sixers led 91-84 by the end of the third and opened the fourth with an 11-0 spurt which put them beyond reach.

In the Western Conference, the Clippers got off to a strong start to lead 60-47 at half-time in Salt Lake City, but the top-ranked Jazz outscored the visitors 65-49 in the second half.

Despite trailing by as many as 10 points in the fourth quarter, the Clippers could have tied it on the final possession and sent the game into overtime, but Marcus Morris' shot was blocked by Rudy Gobert.

Donovan Mitchell scored 45 points for the Clippers while Kawhi Leonard had a team-high 23 for the Jazz.

The Denver Nuggets' Nikola Jokic became the lowest-drafted MVP in NBA history and the first player in franchise history to win the award.

The Serbian centre started all 72 games for the Nuggets and averaged 26.4 points, 10.8 rebounds and 8.3 assists per contest - all setting or matching career highs.

The 26-year-old was drafted 41st overall in 2014 and is only the second second-round draft pick to become an MVP after Willis Reed (1970), who was the eighth pick in 1964 when there were just nine teams in the league.

An All-Star for the third straight year, Jokic is the third European to be named the NBA's MVP after Dirk Nowitzki and Giannis Antetokounmpo, who won the award the last two seasons.

Jokic earned 91 of 101 first-place votes for a total of 971 points, with Embiid second with 586 points and Golden State Warriors guard Stephen Curry third with 453.