U-20 Afcon: Barnes - Walking in his father’s footsteps with Ghana 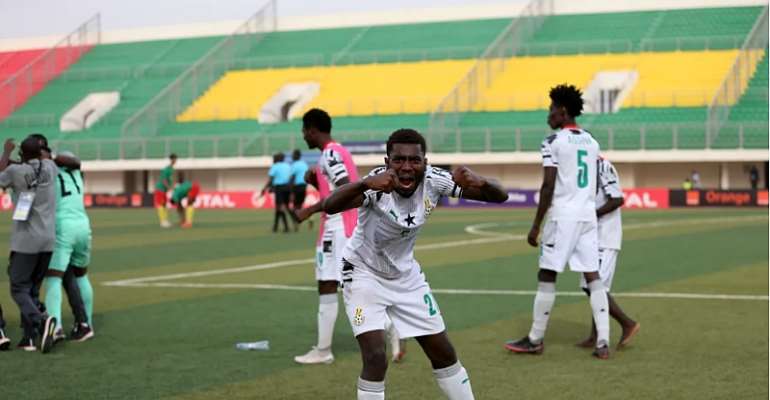 Striker Joselpho Barnes hopes he can be the next Ghanaian star to come out of the Total Under-20 Africa Cup of Nations (AFCON), just as the likes of Andre Ayew who captained the side to the trophy in 2009.

Barnes, the son of former Black Stars defender Sebastien Barnes was born in Germany and is making his first-ever appearance for the Ghanaian national team at the 2021 AFCON U20 tournament in Mauritania.

The 19-year old’s dad, Sebastien, famously captained the Ghanaian Under-17 team to the World Cup title in 1991 beating Spain by a solitary goal, before also leading them to a second consecutive final in 1993 where they lost to Brazil.

And now, the Junior Barnes has taken the inspiration from his dad and chosen to represent Ghana, hoping to rake in as much, and even more success, like his dad.

He draped in the famous Ghanaian kit for the first time ever in the Black Satellites opening match against Tanzania where they won 4-0, scoring a goal on his debut.

“It has been like a dream for me. I have enjoyed every minute of being here since I came in,” Barnes told CAF Online.

“When we got the news that I had been called up, we were so excited with my dad. We were overjoyed and just couldn’t believe that it has happened. My dad was so emotional because he played for Ghana and now his son was going to play too,”

“I have had a very positive first impression from all my teammates, coaches and the management. It took me a while to blend in when I came into the squad, but they really helped me to settle down and feel like part of the family,”

“They did not treat me differently because I come from Germany, but it is all about football and talent. They just take me as I am and this fits very good for me. I have felt comfortable and at home since joining the team,” an excited Barnes says.

He adds; “The culture is good and there’s a lot of love from everyone. It is like a big family, not just about football but a huge brotherhood of Ghanaian people.”

Following his father for games, watching him play and learning of his exploits with the national team were enough to convince him to turn out for Ghana, though he was still eligible to play for his country of birth, Germany.

He came through the youth ranks of German football, having started out at Cologne from the U 8-13. He then moved to Bayer Leverkusen, his dad’s former team where he played from U13-U15 before decamping to Schalke where he is currently playing for the Under-23 team.

“My dad played a huge role for me to choose Ghana. He always told me of his stories playing for the Under-17s and I really wanted to follow in his footsteps so that is why I decided to play for Ghana. I wanted to be like him and even better and make him proud,” the striker adds on.

People have idols like Cristiano or Messi but for me, my dad is my role model and my idol - Joselpho Barnes

The senior Barnes played for Ghanaian giants Hearts of Oak before moving to Germany where he turned out for Bayer Leverkusen and Mainz 05 among other clubs. Joselpho says watching his dad play in the final years of his career made him fall in love with the beautiful game.

“As a child, my dad would take me to his games and I would watch him play and that excited me a lot. He would also take me to the field and show me some new skills and try to teach me some things and that influenced me a lot,”

“Even today, he has a very big influence on me. He watches me in games and then in the evening, he would tell me what I did wrong and how I could do things better and also congratulate me if I did something nice or scored a good goal. Without my dad, I could not be here today,” he added.

“He is my hero and even today when he goes out to play with his friends, I am always excited to watch him. People have idols like Cristiano or Messi but for me, my dad is my role model and my idol,” further stated the forward.

One thing he wants to do better than his dad though is raking in more appearances for the senior national team, the Black Stars. He hopes to keep working hard and impress with the Under-20 team and hopefully, break into a very competitive senior team.

“I am very confident in my abilities and I know if I work very hard, I can do it. In the next two or three years, I want to push myself further to see to it that I get that opportunity to play for the Black Stars,” Barnes, who also looks up to Ghanaian legendary striker Asamoah Gyan says.

Even as he waits for the opportunity, Barnes hopes to continue with his dream debut and help the Black Satellites to their fourth AFCON U20 conquest.

“For me, this has been a great run and more like a dream. I think when we win the Cup and we are there taking photos with it, that is the only time I will probably believe that this is not a dream,” he notes.

Barnes has not been in Ghana since he was 14 years old, and winning the trophy will give him a chance for a triumphant return in five years. He is still learning the local languages and though he says it has been a difficult start, he hopes to be fluent soon.

“My teammates are teaching me and I am trying to learn a bit. But it’s difficult. Hopefully, soon I will be good,” Barnes says with a cheeky smile on his face.