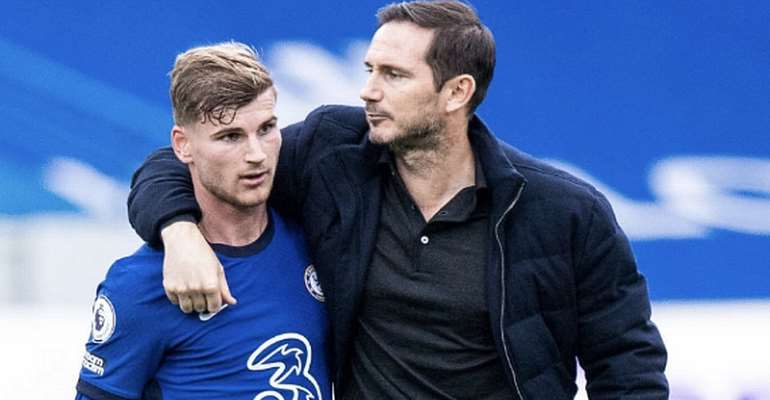 Timo Werner has conceded his goal drought may have been a contributing factor in Frank Lampard being sacked by Chelsea.

After making a bright start to life at Stamford Bridge, the Germany international’s goal output ran dry - as he went two months without finding the target.

He snapped his barren run with a goal against minnows Morecambe in the FA Cup on January 10, but within a fortnight Lampard had been axed and replaced with Thomas Tuchel.

Werner missed some huge chances during his goal drought, at times he looked extremely emotional, and he has admitted that if he had been more clinical, Lampard may still be at the helm.

"When you come here to play as a striker and be the man to score the goals, of course, I felt a little bit guilty that I missed so many chances,” Werner told Sky Sports. “For the club, for the old manager but also for me because I want to score all the time and as much as I possibly can.

OF COURSE, IF I'D SCORED FOUR OR FIVE MORE GOALS MAYBE THE OLD MANAGER WOULD STILL BE HERE BECAUSE WE'D MAYBE HAVE WON TWO OR THREE GAMES MORE BUT YOU CAN'T LOOK TOO MUCH INTO THE PAST BECAUSE THERE ARE TOO MANY GAMES AHEAD OF US.

Werner’s goal return has not yet improved markedly, he has found the target once under Tuchel, but he feels more confident and admits being able to communicate in his native language has helped.

"It's a new beginning for everybody, for me as well because I'd missed so many chances and so many points, maybe I start now with a new start, and it's worked very well until now,” he said.

"I understood the old manager very well. It was not because of the language, but when you can talk German to someone, there are things he can explain to me easier than the old manager could. It's different when you talk to someone in your own language because one word is enough to make a sentence completely different.”