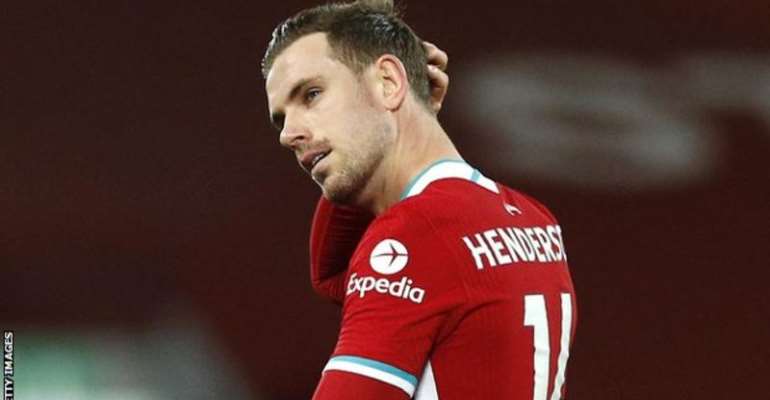 Henderson was forced off in the 29th minute against Everton

Liverpool captain Jordan Henderson has been ruled out for up to 10 weeks as a result of the groin injury he suffered against Everton.

The England midfielder, 30, was forced off in the first half in Saturday's 2-0 Merseyside derby defeat to add to the club's defensive problems.

Henderson has had surgery and will miss three England World Cup qualifiers but is expected to return this season.

The midfielder has been used in defence in recent weeks with Jurgen Klopp without his three main centre-backs.

A club statement did not put a timeframe on his return, but BBC Sport understands he is likely to be out for eight to 10 weeks.

"No specific timescale is being placed upon his return," said a statement on the club's website.

"However, the 30-year-old is ruled out initially until after the March international break."

He will now miss at least five Liverpool matches, including a home Premier League game with Chelsea and the second leg of their last-16 Champions League tie with RB Leipzig.

He will also be unavailable for England's qualifying games against San Marino, Albania and Poland in March.

However, it does appear he will be fit in time for this summer's rescheduled European Championship, which begins on Friday, 11 June.