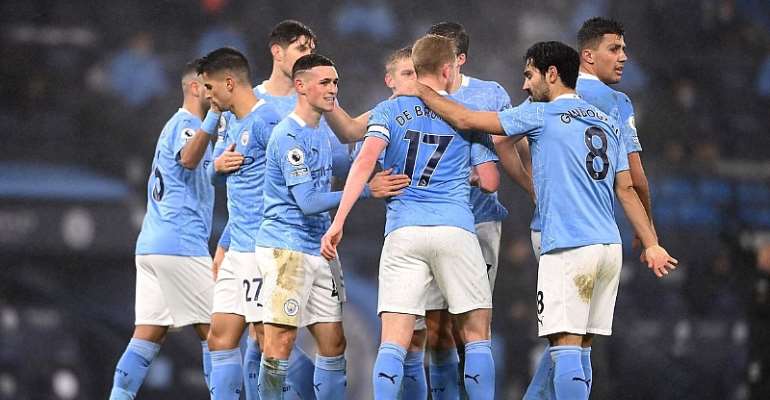 Phil Foden scored the only goal as Manchester City edged a drab affair with Brighton 1-0 at the Etihad Stadium.

Raheem Sterling came on late, only to miss a penalty, as City recorded a seventh-straight league win to pile pressure on both Manchester United and Liverpool.

Despite the gulf in both class and form hugely favouring the hosts, Brighton gave a good account of themselves from the start. They stayed defensively strong, while Premier League debutant Percy Tau, Alexis Mac Allister and Leandro Trossard threatened in attack.

It was City, though, who dominated the ball and created the better chances. Kevin De Bruyne was pulling the strings, and forced Robert Sanchez into two good saves either side of seeing an indirect free kick, thanks to an Adam Webster backpass, get blocked by Mac Allister.

Riyad Mahrez was busy on the right-hand side, but City's frustration was growing as half time approached. That was until the final minute of normal time, when De Bruyne fed Foden, allowing the Englishman to place his eighth goal of the season past Sanchez at the near post.

But that goal didn't release the handbrake properly; Mahrez spurned a great opportunity just shy of the hour before Ilkay Gundogan had a shot blocked and Bernardo Silva struck the post. Brighton weathered that mini storm before Sanchez denied both Joao Cancelo and De Bruyne again.

Substitute Neal Maupay squandered the chance of an equaliser with 13 minutes remaining when he failed to lob Ederson, who was compromised after a Trossard through ball. John Stones cleared the danger, as City summoned Sterling.

He failed to wrap up the points from the penalty spot in stoppage time after Sanchez brought down De Bruyne. His effort skied over the bar, but City held on to go third in the Premier League.