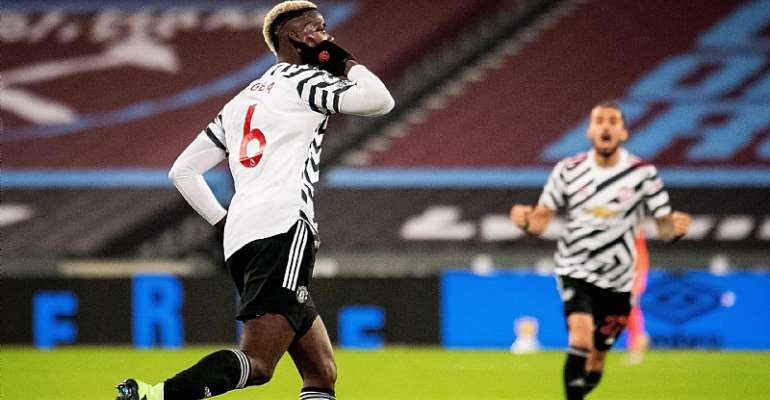 Manchester United again came from behind on the road to make it nine successive away league wins with a 3-1 victory at West Ham to climb into the top four.

With no Bruno Fernandes in the side – the first time the Portuguese had not started a league match since arriving in Manchester – United were woeful in the first half, and should have conceded more than Tomas Soucek’s opener in the 38th minute.

However, with Fernandes on at the break, United came out a totally different side in the second half, and blew West Ham away with Paul Pogba brilliantly levelling things up in the 65th minute, before another top-class finish from Mason Greenwood – his first league goal of the season – turned the match on its head less than three minutes later.

And to cap off a ruthless second-half showing, another half-time substitute, Marcus Rashford, lofted a lovely third into the net to complete a fifth successive away win this season for United – the first time they have won their first five away games in a single league campaign since 1985-86.

With fans back in London Stadium for the first time since February, there were plenty of surprises when the United team was announced with Fernandes and David de Gea not in the starting XI – the Spanish stopper out injured, with Rashford only fit enough for the bench.

With Pogba and Donny van de Beek in the middle, United gave the ball away time and again in the opening period, and could have fallen behind sooner, only for Pablo Fornals to head wide from a good position.

United continued to look lacklustre in the extreme and eventually conceded as an ummarked Declan Rice was left alone to flick a corner on for Soucek to steer the ball home, again without a defender in sight.

Ole Gunnar Solskjaer made a double change at the break, and all hell broke loose after Pogba had arrowed a strike into the net from 25 yards, on the end of a Fernandes pass, of course.

With the home side still stunned from that bolt out of the blue, Greenwood showed his prowess in the box as he span and fired into the bottom corner, before Rashford put the game to bed with a finish of a very different nature, to ensure United continue their madcap season to sit just two points off top, despite not hitting anything like top gear.