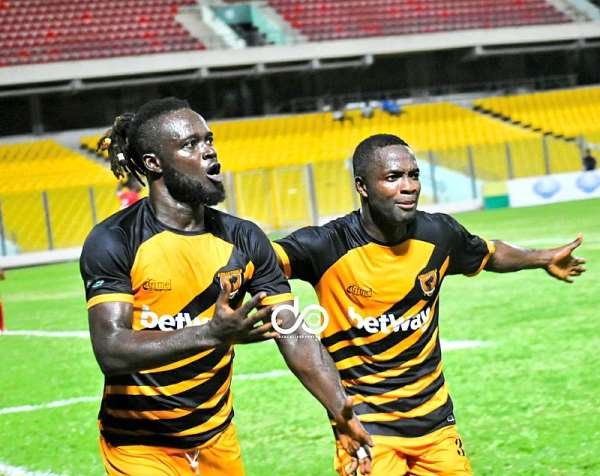 Ashanti Gold SC goal poacher, Hans Kwofie says he wants to win the Ghana Premier League title for the club at the end of the 2020/2021 football season.

The former goal king of the Ghanaian top-flight league rejoined the Miners club in the off-season to strengthen their squad after partying ways with a number of top players.

After two matches into the new season, Hans Kwofie has already established himself as the main man for Ashanti Gold SC.

On Tuesday night, he starred for the side when he scored a brace to rescue a vital point for the side in a 2-2 draw against Hearts of Oak at the Accra Sports Stadium.

Speaking to Hot FM on Wednesday morning, Hans Kwofie says his aim is to help Ashanti Gold win the Premier League title at the end of the campaign.

With his brace against Hearts of Oak, Hans Kwofie now has 3 goals in 2 matches for Ashanti Gold SC.