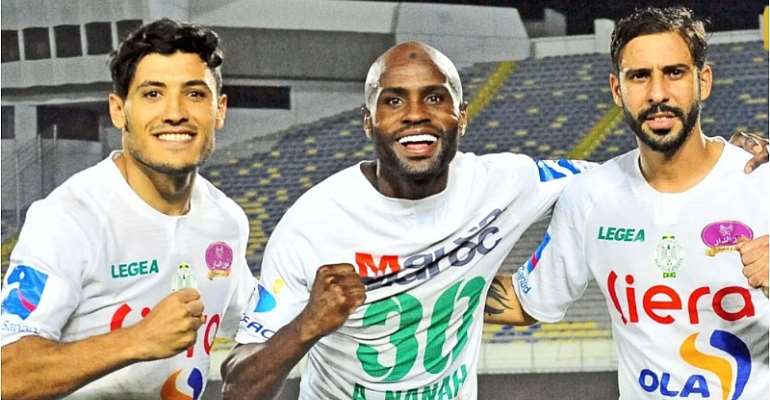 With only a handful of African Leagues continuing due to the international FIFA window, those few provided the drama needed, with the top of the pile being in Morocco.

Raja Club Athletic warmed up for their Total CAF Champions League semi-final match against Egyptian side Zamalek with a league title, won at the very end.

Here is a brief summary of African leagues action from the weekend.

The final day of the Moroccan Botola Pro on Sunday served up the spicy drama of a proper title fight when the league crown was won by Raja Club Athletic at the stroke of full time.

Abdellilah Hafidi scored in the 90th minute to hand Raja a 2-1 victory over FAR Rabat to literally clinch them the crown at the death.

The title race was down to a three-horse race between Raja, arch-rivals Wydad and RS Berkane. Fate was on Raja’s hands and they only just needed to win while Wydad and Berkane were hoping for a loss.

It seemed to be headed in Wydad’s way as they were leading 2-1 against FUS Rabat with Raja held to a 1-1 draw. As at that point, they were a point above their arch-rivals. But Raja fought to the end, breaking Wydad hearts at the stroke of 90 minutes.

This was Raja’s first Botola title since the 2012/13 season and their 12th in history.

Olympique Khourigba and Raja Benni Melal have been meanwhile relegated from the Botola. Khourigba lost their last game of the season 2-1 away to Moghreb Tetouan while Benni Melal drew 1-1 with Renaissance Zemamra.

South African tactician Pitso Mosimane continued with his unbeaten start to life as Al Ahly coach after the Red Devils played to a 0-0 draw against Pyramids. Ahly played half the game with 10 men after Amr Soleya was sent off in the 43rd minute.

The first half was eventful. Not only was Soleya red-carded, but Ahly also missed a penalty whe Mohamed Magdy saw his effort saved by Pyramids keeper El-Mahdy Soliman.

Ahly have already assured themselves of the Champions slot, but Pyramids saw their hunt for second spot finish dented by the two dropped points. Mosimane has now picked up seven points off two wins and a draw since he took charge.

Elsewhere, Ahly's rivals Zamalek skipped Pyramids to second when they came from behind to beat Haras El Hodood 2-1.

Mahmoud Hamdi scored the winner for the White Knights 15 minutes from time to take them to 65 points, one ahead of Pyramids who dropped to third. Amr El Halwani had given El Hodood a seventh-minute lead from the penalty spot before Mostafa Mohamed drew the two teams level after 64 minutes.

The result meant Haras El Hodood are relegated to second-tier alongside FC Masr and Tanta who were already relegated before.

Meanwhile, FC Masr suffered a 3-0 home defeat to El-Entag El-Harby while El Masry beat Al Ittihad 2-1 to move to seventh in the standings.

Jean Kaswayi scored the lone goal from the penalty spot a minute after the restart as FC Renaissance moved to the top of the Linafoot Ligue One with a 1-0 victory away to Racing Club Kinshasa on Saturday.

The victory away from home took Renaissance to seven points from the first three matches, remaining unbeaten with two wins and a draw.

Meanwhile, Sportive Maniema Union moved to second spot despite being held to a 1-1 draw away to Jeunesse Sportive de Kinshasa at the Pentecostal Martyrs Stadium.

Mbala Bloda opened the scoring for the visitors in the sixth minute, but they dropped two vital points when Mercey Ngimbi equalized for JSK from the penalty spot in the 28th minute.

Meanwhile, Saint Eloi Lupopo played their first match of the season and started with victory after seeing off Groupe Bazano 1-0.