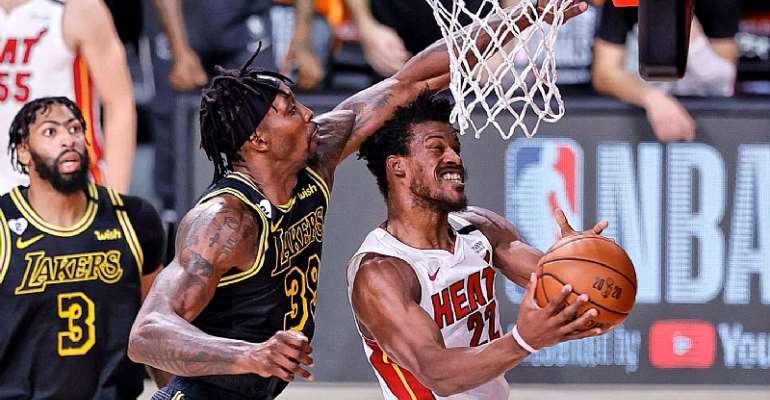 The Los Angels Lakers were a little more than 20 seconds away from winning their 17th NBA title.

The Lakers' Danny Green then missed a wide open three-pointer. Markieff Morris grabbed the offensive board but turned the ball over trying to make a pass.

"We got a hell of a look to win the game, to win the series. It didn't go down," LeBron James, who had 40 points on 15-of-21 shooting, to go with 13 rebounds, seven assists and three steals, told ESPN's Rachel Nichols.

Miami's thrilling 111-108 win in Game 5 kept them alive in the NBA Finals -- the Lakers lead the best-of-seven series three games to two.

Game 5 was the Lakers' first loss in this postseason in the "Black Mamba" outfits.

Bryant's widow Vanessa showed her support for the uniform update, posting "Mamba and Mambacita jerseys approved for game 5" and "Let's go @lakers" on her Instagram account.

Bryant adopted the "Black Mamba" identity midway through his career, a nod to the killer instinct and ferocious nature of the extremely venomous snake from sub-Saharan Africa.

The Lakers ave since adopted Bryant's "Mamba mentality," and dedicated the remainder of the 2019-20 season to the fallen icon following his death.

When the squad breaks the huddle they do so with the phrase "1-2-3 Mamba!" and James, along with fellow star Anthony Davis, have added ink in honor of Bryant, as each now sports Kobe-themed tatoos.

Akufo-Addo will have no choice than to assent to Anti-LGBTQ ...
27 minutes ago