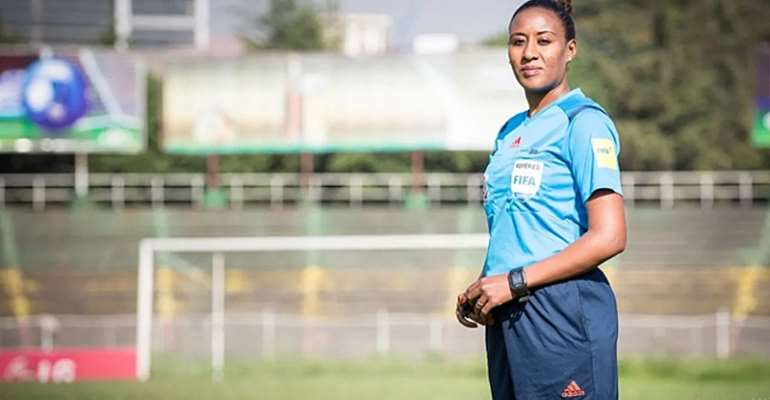 Starting off as a professional basketball player, not many thought Lidya Tafesse Abebe would trade the rims and bounces for the whistle, and not in basketball, but football.

The 40-year old has been on a 20 -year journey of refereeing, becoming the first-ever woman to officiate a men’s top-flight game in Ethiopia.

She was also the first-ever woman FIFA centre referee in the East African nation.

“I started off in Jimma while still playing basketball. I played football in school but basketball was my first sport. I was interested when I met one of the instructors doing some courses and some of us from the basketball team were invited. I liked how he was teaching and I got interested more,” Tafesse says.

The seed planted in her soul by the FIFA/CAF instructor Shiferaw Eshetu continued to germinate and grow as the days went on.

“It was very difficult when I started because sometimes, some people would ask why I decided to go into refereeing as a woman when there were no any other women doing the same"Lidya Tafesse

When she moved to the capital Addis Ababa to continue her basketball career and pursue a course in Pharmacy, the interest continued and soon, she started building on with more courses and when it became apparent that she had found some new love, dumped the old one; basketball.

“I was part of the female referees project and I started off by doing the Under-15, 17 games, the local tournaments as well as some Federation tournaments. I got more certification and I started doing the Men’s Premier League as an assistant referee and in 2005, I became a centre referee,” narrates Tafesse.

The journey, though satisfying hasn’t been easy for the mother of one. When she started, there were no women referees and when she officiated men’s games, there was even more difficulty.

But her resilience and desire to make a mark in Ethiopian football drover her passion.

“It was very difficult when I started because sometimes, some people would ask why I decided to go into refereeing as a woman when there were no any other women doing the same. But my family supported me and I am grateful for them,”

“Also, I came from a sports background and the fact that while playing basketball we trained and played against some men teams gave me confidence and it wasn’t so difficult for me at times, even when I did men’s games,” explains Tafesse.

She also remains grateful to the Ethiopian Football Federation who gave her and her colleagues confidence to continue and even-handed them Premier League matches to boost their confidence. He vividly remembers the influence former vice president Tihaye Egziaber had on her.

“He would talk to us as women referees and really encouraged us. He gave us so much support,” she states.

Her impressive performances earned her a first-ever international assignment in 2006 when she officiated an Under-20 Africa Cup of Nations qualifier between Nigeria and Liberia in Abuja and that opened the floodgates for her to grow.

“I will not forget that match because it was so different. The stadium was bigger than what we are used to here in Ethiopia, the crowd was amazing and the level was definitely good,” Tafesse remembers.

But in between all those wonderful assignments, she faced a challenge that nearly slowed down her sailing career. In 2013, she conceived her first born child who will be turning seven years old in October. But, the aftermath of her return seven months later was full of challenges.

“Physiologically as women, we have so many body changes after pregnancy and I was not different. I gained so much weight and I had to work very hard to get back in shape. I worked a lot and eventually I was better and in 2014, I got a chance to go for the Cup of Nations,”

“But while training there, I got injured and in my mind, it was all over for me. I tried to do some tests and see whether I could go on but I had decided I would go home. However, the director came and told me ‘Lydia you are not going. Just try and see whether you can recover’. I started treating the sprain on my ankle every day and ultimately, I got better,”

“I did a match in the semi-final, Cameroon vs Côte d'Ivoire which went up to extra time. Surprisingly, I was stronger and fitter than both teams when the game went to 120 minutes. I was so pleased,” Tafesse remembers.

This is one of her most memorable matches. The other one was in 2012 when she officiated another semi-final pitting Nigeria and South Africa, a match that the Banyana Banyana won 1-0.

“It was such a great game to officiate because both of them are brilliant teams. Also, it was very hot and I remembered hoping it would not go to extra time,” jokes Tafesse.

She hopes to continue getting high profile games moving forward and is even more excited that she will get a chance to officiate at a CAF men’s tournament for the first time as she is among those picked for the Total African Nations Championship (CHAN) in Cameroon next year.

Despite the stoppages caused by the COVID-19 pandemic, Tafesse has continued to train on her own and has also use the time off competitions to give back to the community.

She is using her background as a pharmacist and knowledge in medicine to raise awareness on the virus and help the community keep themselves safe from contracting and spreading the virus.

“I have been doing education on social media and in radio and TV stations just trying to tell people on the dangers of the virus. I also go to the communities and teach them how to wash hands and keep hygiene. Also, I have been giving back to the community by helping the vulnerable who have not had a chance to get food and basic commodities,” she states.

On her training, Tafesse admits that it has been tough but notes she has not had a reason to put the feet off the gas. “I train outside three times a week and also indoors where I have tried to put up my own small gym. We have a system where we have to make reports daily as well as GPS trackers to ensure we are training.”

As a woman, Tafesse says it has been great balancing between her family and refereeing, a career she has given her full attention to. The support from her husband and the motivation of her seven-year-old keeps her going, Tafesse says.

And now, she hopes she can influence the next generation of women referees in Ethiopia and the continent at large to take up the career. She hopes that after her active years, apart from continuing with her profession as a pharmacist, she will switch to become an instructor as she looks to get more and more following her path.