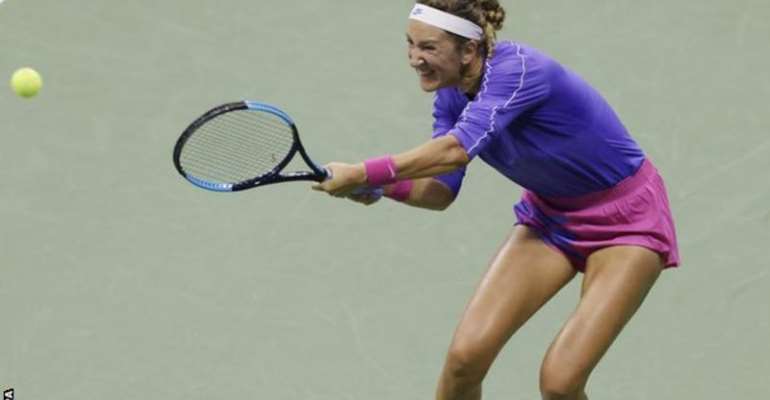 Victoria Azarenka won the Australian Open titles in 2012 and 2013

The two-time Australian Open winner has endured difficulties on and off the court since returning to playing after giving birth to son Leo in 2016.

On Wednesday, Azarenka took advantage of an awful display by Mertens.

She broke her opponent six times in total to complete a stunning victory in only 73 minutes.

The recent Western & Southern champion will now face old foe Serena Williams, whom she has played 22 times but only beaten on four occasions.

"I'm so excited about this amazing opportunity to play a champion, someone, I respect a lot and who's my friend," she said. "I hope it will be fun - it'll be fun for me."

Azarenka rolled back the years with some of her groundstrokes, especially the powerful double-handed backhand down the line, and she was also helped hugely by a below-par Mertens.

The 24-year-old Belgian was exceptional against Australian Open champion Sofia Kenin in the previous round, but it was a different story on Wednesday as she produced woeful service statistics - winning 14% of points on her second serve in the first set - compounded by several errors on her forehand.

They broke each other early in the match before the former world number one repeated the trick twice more courtesy of her opponent's double fault and then her own excellent backhand down the line.

After taking the first set, Azarenka adopted a zen-like pose on her chair. While the Belarusian appeared relaxed on resumption, Mertens looked anything but and yet again another double fault led to her being broken in the opening service game of the second set.

Her game had fallen apart as Azarenka broke twice more en route to setting up a mouth-watering semi-final against Williams on Thursday.