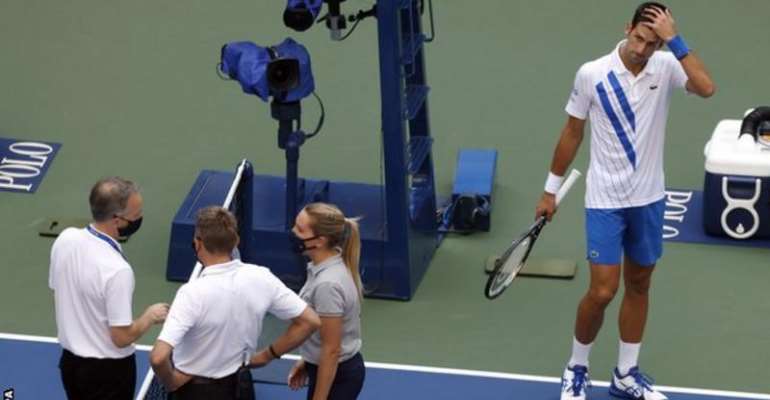 Novak Djokovic (right) was on a run of 26 matches unbeaten

The Serb, 33, was defaulted after striking a line judge with the ball in Sunday's fourth-round match against Pablo Carreno Busta in New York.

After a lengthy discussion, he was defaulted by tournament officials.

Henman told Amazon Prime: "He was not aiming for the official, but you're responsible for your actions."

He added: "There was no other consequence.
"We saw a couple of points earlier when he whacked the ball into the advertising hoardings. He was frustrated."

Henman was 20 when he was disqualified from Wimbledon in 1995 for a similar incident, where he accidentally struck a ball girl during a men's doubles match.

Djokovic showed his frustration after losing serve to trail 6-5 against Spain's 20th seed Carreno Busta, taking a ball out of his pocket and hitting it behind him, striking the female line judge in her throat.

Henman added: "It's amazing for me to talk about this. It was a moment of frustration for me too - I hit the ball away when I wasn't looking and I hit a ball girl."

There was another incident more recently when, in 2017, Canada's Denis Shapovalov was defaulted from a decisive Davis Cup rubber with Britain's Kyle Edmund for hitting the ball in anger and striking the umpire in the face.