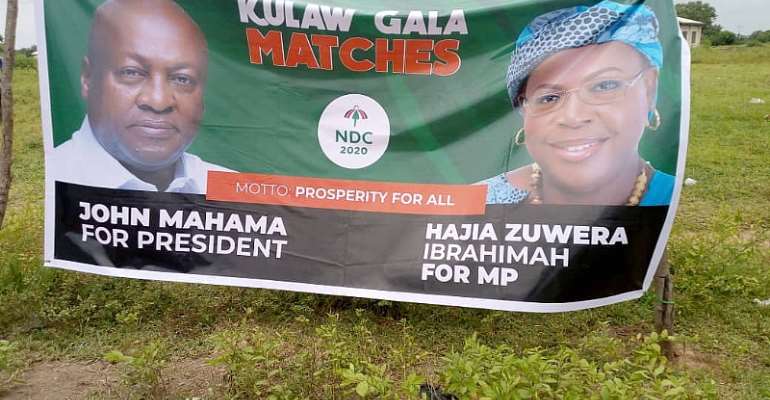 In keeping with her vision of nurturing and empowering the youth of Salaga South Constituency, Hajia Zuwera Ibrahimah, the NDC Parliamentary Candidate for the December elections sponsored the annual Kulaw Football Gala.

The participating teams from ten communities were:

In a speech delivered on her behalf by the Constituency Youth Organiser, Mamuda Muazu alias DS, Hajia Zuwera implored the youth to live healthy lifestyles and take their schooling seriously.

She applauded the sportsmanship exhibited by the youth of Kuluw and charged them to let the spirit of brotherliness be their guide as the nation went into the electioneering campaign.

She advised them to eschew violence of any type but conduct an issue-based campaign. Hajia enumerated the many development challenges in the Kuluw area and indeed the entire Salaga South Constituency which needs to be addressed urgently and asked the youth not to spend their energy on needless conflict but channel such precious energy into productive ventures that will help bring development to Kulaw.

She encouraged them to form debating clubs and use such platforms to debate and discuss the development challenges confronting Kulaw.

In her speech, Hajia told the youth that the next NDC government will provide the Kuluw area with a Secondary school to save them the trouble of traveling to Yeji, Salaga, and Atebubu to access secondary education.

She said the next NDC government will also expedite action in completing the electricity extension project that the previous NDC government started in Kuluw and also provide the area with reliable telephone connectivity with its additional advantage of reliable internet. Hajia told the youth to be ambassadors of the NDC 2020 campaign and vote massively for President Mahama and Hajia Zuwera.

Hajia Zuwera was represented at the gala by the Constituency Youth Organiser, Mahmudu Muaza, and his two deputies, Mr. Daniani Mairiga and Mr. Soale Osman as well as Mr. Kwabena Andrew, Treasurer of the RC branch, Salaga and Aide to the parliamentary candidate.