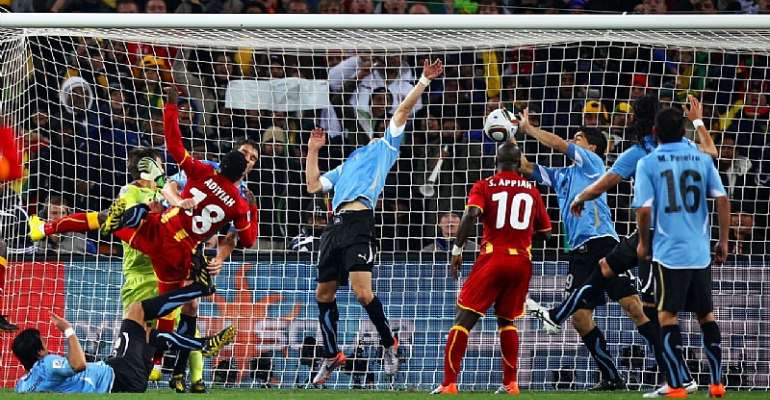 Former Ghana international, John Paintsil says he is hurt with how Black Stars exited from the tournament.

In the match, towards the end of extra time at the 120th-minute, with the scoreline stuck at 1-1, Luis Suarez was sent off for a goalline handball clearance, leading to a spot-kick for Ghana.

The Barcelona forward prevented Dominic Adiyiah' headers from scoring in the last minute of the game.

However, Asamoah Gyan struck the injury-time kick against the crossbar, breaking the hearts of millions of Ghanaians and Africans.

Had he converted, he would have sent the Black Stars into the semi-final of the World Cup – the first by any African nation.

But according to Paintsil, Ghana was cheated due to how they exited their tournament.

"I am always sad when I watch the video and how we exited the tournament," he told Citi TV.

"For me, we were cheated because you look at the time Suarez used to two hands to prevent the ball from entering the net is unacceptable.

"He was sent off but it should have been a goal for us," he said.

"You don't this when the whole is watching," he added.

Ghana have since 2010 not gone close to the quarter-final of the World Cup.

In 2014, the Black Stars suffered a group stage exit while in 2018, they failed to qualify for the tournament altogether.

Paintsil was a member of the team that qualified the country for its maiden World Cup appearance in Germany in 2006.