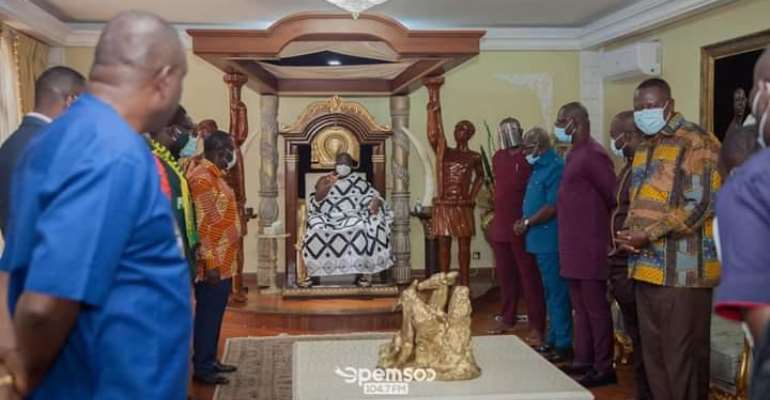 It was colourful and historic on Friday at Sports Hotel, Kumasi as Kotoko unveiled Nana Yaw Amponsah as new CEO. The event saw a family-like atmosphere of people who have Kotoko blood in them coming in high spirits for the occasion.

Past management members, old footballers, past board members and members of the various supporter's wing of the club joined hands with the new board on such a memorable day in the annuls of the club.

But the most important event on the day was the seeking of the blessing from Life patron of the club, Asantehene Otumfour Osei Tutu II at the palace. The king met the three arms of the club ie Board members, new CEO Nana Yaw Amponsah and Chairman of the National Circles Council, Christopher Damenya.

Opemsuo was happy to see a day like this where it seems everything was set for a brighter future of one arm of his kingdom, Kumasi Asante Kotoko. He took time to address each arm present, calling for unity since that was the only way to success.

To begin with the Board, life patron thanked them for the processes they have gone through to appoint Nana Yaw as club’s CEO and called for a support system that will set him up for success. Opemsuo further tasked the board to make sure provision of everything needed for Nana Yaw to ensure a creation of an enabling environment to aid him to achieve glory as head of management.

The blessing got interesting when it was turn of newly appointed CEO, Nana Yaw Amponsah as Otumfour warned him to be careful of people who will come to him with his name to instruct him about and advised Nana Yaw to seek for his personal confirmations before he believes any such people.

The supporters got their share of what the king prays to happen going forward as he instructed through Chairman Dechris the need for the supporters to go organize and mobilize themselves well enough to give support to the board and management to ensure their success vision become a reality.

Otumfour Osei Tutu II was all about unity and perfect segregation of powers, respect for each other and hard work as the only means to ensure a turn around of the fortunes of his beloved club Asante Kotoko Sporting club.