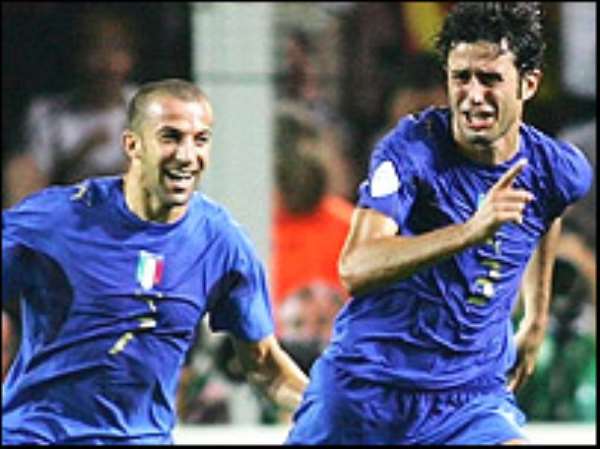 Stunning late extra-time strikes from Fabio Grosso and Alessandro del Piero took Italy into the World Cup final at Germany's expense with a 2-0 win.
An absorbing semi-final seemed set for penalties until Grosso curled man of the match Andrea Pirlo's pass past Jens Lehmann with just one minute left.

Del Piero then finished an Italy break with a delicate chip into the corner.

Germany's Lukas Podolski earlier sent a header wide and saw a shot saved, but the hosts' Cup dreams were shattered.

There were, unsurprisingly, tears among German players and fans after the extraordinary end to an enthralling encounter - in which Italy also hit the woodwork twice in extra-time.

The opening 90 minutes were intriguing - but goalless - and it was in the extra period that the game truly exploded into life.

The Italians, famed for their defensive strength, adopted an increasingly attacking approach, aware of the Germans' brilliant record at penalty shoot-outs.

But Podolski led the German attacking threat, missing the header from David Odonkor's cross and forcing a brilliant one-handed save from Gianluigi Buffon.

Del Piero then squandered a shooting chance from the edge of the box after great work from Vincenzo Iaquinto and Francesco Totti and Pirlo forced a diving save from Lehmann.

But Pirlo still had time to have his say as, with Italy pushing forward in numbers, he threaded the ball to Grosso whose first-time shot left Lehmann with no chance.

The goal was timed at 119 minutes and Germany, and their supporters who had crammed into Dortmund's Signal Iduna Park, were stunned.

And as Jurgen Klinsmann's side pushed forward in desperation, Gilardino found the ball in space and rolled it to Del Piero who sent a clinical finish beyond the advancing Lehmann into the roof of the net.

Fabio Cannavaro, exceptional throughout the match, marshalled the Italian back line effectively and limited Germany in the opening period.

Italy saw a Pirlo free-kick on 24 minutes elude both Luca Toni and Marco Materazzi by a fraction.

Then Toni was played in by Grosso, only for his goalbound shot to be blocked by Per Mertesacker.

Germany, however, fashioned the best chance of the first half, but Bernd Schnieder shot over after finding rare space behind the Italian defence.

Buffon had to make his first real save, and had to race from his goal to block as Miroslav Klose danced his way into the area.

Germany were on top and Buffon parried a close-range effort from Podolski 12 minutes later.

But extra-time seemed inevitable as Michael Ballack, not at his imperious best, sent a free-kick over the top from 20 yards.

Indeed, the 90 minutes ended without a goal - opening the dramatic extra period in which Grosso and Del Piero wrote themselves into Italian football history.

Their delight at the final whistle was in stark contrast to Germany, who were left bereft as their dream of lifting the World Cup on home soil came to a sudden, heart-breaking end.