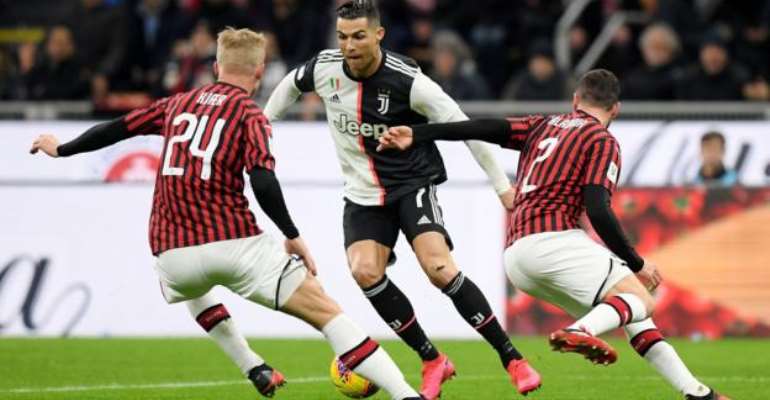 Juventus and AC Milan will be the first two sides back in action following the suspension of Italian football when they face each other in Friday's second leg of their Coppa Italia semi-final.

Football in Italy was halted on 9 March because of the coronavirus pandemic.

The final of the competition is set for 17 June, three days before the resumption of Serie A.

Napoli lead Inter Milan 1-0 in the other semi-final, which will be played to a conclusion on Saturday.

All games will be played behind closed doors, although the head of Italy's football federation (FIGC) Gabriele Gravina has said he hopes that some fans can be allowed back into stadiums to watch matches before the end of the current season.

This week it was decided that extra-time would be scrapped for the cup ties, which will go straight to a penalty shootout if they remain level on aggregate after the second leg.

As one of the European countries initially worst hit by coronavirus, Italy were one of the first to enact measures in football to try and combat the disease's spread.

Six Serie A matches were played behind closed doors, including SPAL's 1-0 victory at Parma, which kicked off 75 minutes late after Italy's sports minister requested the league be suspended.

This was enacted on 9 March with 12 rounds of matches (along with four outstanding games) remaining and Juventus leading the top-flight table, a point ahead of Lazio.

The Coppa Italia semi-finals second leg between Juve and Milan was originally scheduled for 4 March but was postponed by the Turin city government at 24 hours' notice.

On 20 May the FIGC set a 20 August deadline for finishing the 2019-20 season, with the current plan being to play the final round of Serie A games on 2 August.

The current schedule dictates that Serie A teams will play twice a week with matches almost every day when the season resumes.

There are just 10 days between 20 June and the season-ending on 2 August that will not feature a game.

The Italian top-flight will be the fourth of Europe's top five major leagues to resume amid the continued threat of coronavirus, as the Bundesliga became the first to restart on May 18.

Spain's La Liga is due to reopen its doors on June 11, while the Premier League is expected to recommence in England six days later.

The Old Lady won the competition four times in a row between 2015 and 2018 before Lazio ended the run last season.

However, Juve coach Maurizio Sarri believes his side are venturing into the unknown after such a long layoff.

"None of the staff at this moment knows where the preparation is because we come off an abnormal interruption," he said.

"This is a unique situation, which does not give us any certainty, also because we have obviously not played friendlies.

"I am satisfied with what I have seen during these days in training, but the response during a game will be different.

"Each player has experienced this period in a different way. Now the point will be to understand what motivations everyone has within themselves."

The cup is more of a priority for 18-time Serie A champions and five-time Coppa Italia winners Milan, whose last major honour came nine years ago.

They are currently seventh in the top-flight table, 27 points behind Juve.

Their cause is harmed by the absence of the injured Zlatan Ibrahimovic for the game against his former club.

The 38-year-old Swedish striker has scored four goals in 10 matches since joining Milan on a six-month deal in December but suffered a calf injury in training in May.

Ante Rebic, who had scored seven goals in nine games before football was suspended, will likely lead the line.

Fellow forward Samu Castillejo, who said he was robbed at gunpoint in Milan on Tuesday, and defender Theo Hernandez are suspended for Friday's game.