Which Rod Of Leadership Manifests In Your Organization? 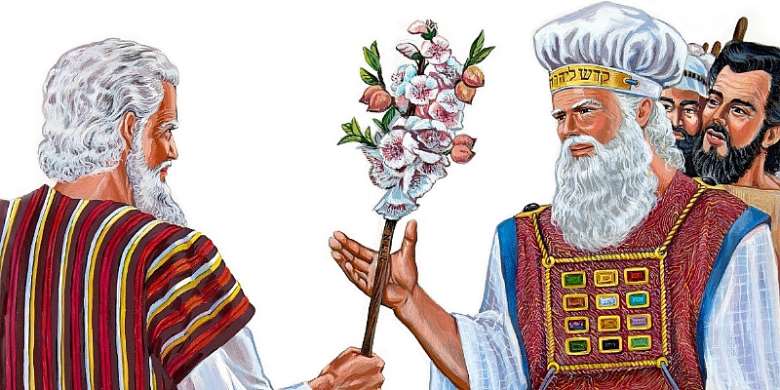 Biblical accounts touch on the stories of Moses and his brother, Aaron. The two brothers bore rods or staffs in their hands. These rods were used for various purposes in their leadership roles among the ancient Israelites. In this article, we will examine the rods of Moses and Aaron and apply their features to leadership in organizational and national settings in contemporary times. After you have read about the two rods, you may be interested in finding out which of the rods manifests in the leadership styles of your organizational leaders. Most organizations are hierarchically structured for the purpose of mandate-based productivity and achievement of desired goals. There are leaders within the organization and these leaders are in the form of managers who wield positional power. There are also followers within the organizations and these followers are in the form of subordinates who are answerable and look up to the leaders for direction. Is your organization led by Moses’ rod or the rod of Aaron or both? It is worth reiterating that staff and rod will be used interchangeably in the piece. Both mean the same prop of leadership. In ancient Israel, the staff is a symbol of authority and an object in the hands of shepherds (Psalm 23: 4) to guide and protect their flocks.

Moses’ Rod and Its Manifestations in Today’s Organizational Settings

Moses’ wonder-working staff was a prop he used in tending his father-in-law, Jethro’s flock in the Horeb wilderness (Exodus 3:1). Moses was already holding the stick when the Lord first appeared to him in the burning bushes. At the Lord’s command, Moses cast the rod on the ground and it turned into a snake. Again, at the command of the Lord, Moses seized the tail of the snake and it changed back into the rod (Exodus 4: 1-5). In the presence of the elders of ancient Israel and before Pharaoh in subsequent times, Moses repeated this miraculous event of his rod turning into a snake and changing back into a rod (Exodus 7: 14; 10: 13). When Pharaoh’s magicians or sorcerers also turned their rods into snakes, Bible says Moses’ rod which turned into snake had swallowed the other snakes or the magician rods (Exodus 7: 11-12).

According to biblical accounts, it was the same rod Moses hit the rocks with and water gashed out for the Israelites in the wilderness. It was with that same rod that Moses smashed the surface of the Red Sea and the water body divided into two, serving as an escape route for the Israelites from the tyranny of Pharaoh.

Symbolically, the wonder-making staff of Moses signifies guidance, kingdom/government, authority, transformational change, effectiveness, weapon, discipline, retribution, leadership or ruling object, protection and many more. Moses used the same rod in punishing the Egyptians by stretching it over the parted sea and the water closed up on the Egyptians and they were drowned. The rod had both physical and spiritual relevance in the lives of the Israelites. The rod manifested differently under different circumstances, making Moses perform myriad of functions either to guide, protect and correct the people as well as quench their thirst.

Just like Moses, organizational leaders are given positional power to cause meaningful transformations for the benefit of society. Symbolically, organizational leaders have similar rods or staffs in their hands. However, it matters in whose hands positional power or authority has been trusted within the organization. The circumstances of wielding the power also matters. We have learnt from Moses that he used the rod for so many things that benefited the people of Israel.

It therefore matters who wields positional power in the organization or within a nation. Some wield it and transform the organization like Nehemiah did in the Bible while others use it to abuse, disrespect, marlin and destroy like Nebuchadnezzar did.

The same Moses-like staff of leadership manifests differently in the hands of national leaders across the globe. Some of these national leaders use their rods of leadership to transform nations and take their citizens from the wildernesses of poverty, diseases, preventable deaths and poor health systems. In contrast, other national leaders also use their rods of leadership to oppress, victimize and vilify their opponents, change constitutional provisions in their favour, cause civil wars, loot the public purse, neglect the health system to its fate and retrogress the whole nation. The rod matters in leadership but it equally matters in whose hands that staff is placed. The Moses-rod-bearing manager must be a pacesetter. The Moses rod –bearing- manager listens to God and surmounts difficult hurdles in the form of rebellion, Horeb wilderness, the Red Sea, Pharaoh etc.

Organizational and national leaders in Ghana for example, must know that the power they wield today emanates from a staff of God (Psalm 23:4) placed in their hands hence they must wield power justly. Article 23 of the 1992 Constitution even demands from people who hold the administrative rod of leadership to act fairly and reasonably because they will be judicially accountable for the power that emanates from their rods.

The Relevance of Aaron’s Staff In Contemporary Organizational Settings

Just like his brother Moses, Aaron also had a rod. The rod of Aaron also manifested in various ways according to God’s plan. While some biblical scholars argue that there was only one rod used at different times by Moses and Aaron, others argue that there were two different rods; one for each of the patriarchal brothers. The basis of this article is not to argue as to how many rods Moses and Aaron were using. It may be only one staff but whenever one of them was in possession, the rod was eponymously called by his name.

Both the staff of Moses and the staff of Aaron had ever turned into snakes but there was some distinctive features of Aaron’s rod, which Moses’ rod did not have. Aside the fact that Aaron’s rod turned the water of Egypt into blood (Exodus 7: 19-21) to punish Pharaoh, the same rod representing the tribe of Levi had sprouted, budded, blossomed, and produced ripe almonds (Exodus 17:8). The significance of Aaron’s rod sprouting, blossoming, bearing flowers and almond fruits is a clear demonstration that Aaron bore a rod that gave life; it was a rod of productivity or a rod of growth or a rod of exponential increase. It was a rod that multiplied. It was a rod of progressive results.

Aaron’s rod was also a priestly staff. God therefore commanded Moses to place Aaron’s rod permanently in front of the Ark of the Covenant to serve as a warning to rebels. This was because God caused the Aaron rod to sprout and bear almond fruits after the Levite Korah and two Reubenites (Dathan and Abiram) rebelled against Moses and Aaron. Under God’s commands, the ground opened and swallowed the rebellious trio and their adherents (Numbers 16: 31-33).

In my view, these distracting line managers and subordinates manifest the spirits of Korah, Dathan and Abiram. If it is so in contemporary organizational settings, then such distractive line managers and subordinates must know that no matter how long they rebel against the Aaron manager, he will excel because the Lord will bless his rod with sprouts, flowers, blossoms and even fruits. The organization will grow remarkably during the tenure of the Aaron –rod- bearing manager no matter the magnitude of rebellion against his leadership. He that leads the organization with the manifestation of Aaron’s rod is a positive change maker and a just disciplinarian.

There are also some leaders who manifest both the Moses and Aaron rods and they excel so much in their leadership. Their name and achievements become a good indelible mark even on the posterity of their nations. Kwame Nkrumah, Kofi Annan, Nelson Mandela, Steve Jobs, Abraham Lincoln, Martin Luther King Jnr and so many other leaders may be cited as examples in this regard.

One may assert based on the discussions so far that productivity and success within contemporary organizations depend largely on who wields power from the rod of leadership. Is the power used to torment or to transform the people being led or being guided?

It is also not how the leader handles the rod that matters but also how the subordinates or followers adhere to the voice of the rod. Organizational success depends on the attitudes of both the leader and the led. Is your organization being led by the Aaron rod or the Moses rod or both? Are the line managers and subordinates in your organization adhering to leadership directives of progress or they distract like Korah, Dathan, Abiram and their cohorts did to Moses and Aaron? With this article, you need to do periodic organizational leadership analysis to see which rod leads you in your organization and how subordinates relate to the rods. In another piece, we will discuss other rods the Bible has accounted for.