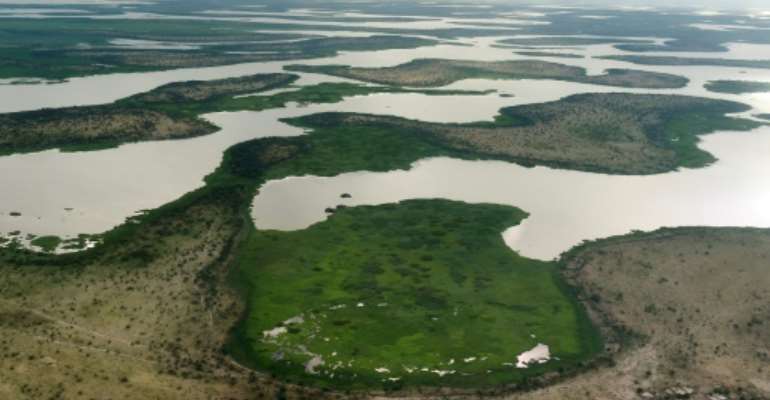 The Lake Chad are with its marshes and islands has proven a perfect base for militants to launch attacks. By SIA KAMBOU (AFP)

Chad has declared two departments near Lake Chad a "war zone", giving local authorities more powers as they respond to an attack by Boko Haram jihadists that killed nearly 100 soldiers earlier this week.

In the Lake Chad region where the borders of Chad, Nigeria, Cameroon and Niger converge, the group has stepped up attacks this year, drawing on their knowledge of the vast marshland and islands.

On Monday, militants attacked an island army base in Bohoma, killing at least 98 soldiers in the worst militant assault ever on the country's military.

"The departments of Fouli and Kaya will be declared 'war zones', according to a decree signed by President Idriss Deby Itno seen by AFP.

The government had already declared a state of emergency in the two departments that border Niger and Nigeria.

The measures allow local and miliary officials to prohibit traffic and also to search homes day and night.

Deby vowed a "lightning response" to the attack when he visited the site of the attack this week.

Chad has presented its military, considered one of the region's more professional armies, as a bulwark against terrorism until Monday's attack in Fouli department.

The jihadists emerged in Nigeria in 2009 before taking their insurgency to neighbouring countries, inflicting escalating losses in lives and economic damage.

One senior officer told AFP that the Bohoma garrison had been weakened recently after one battalion was dispatched elsewhere.

Chad has promised in recent months to send 480 soldiers to the "three-border area", on the borders of Mali, Burkina Faso and Niger, to fight against jihadist groups.

Chad has been dispatching troops outside its borders to cooperate in regional anti-jihadist operations, in exchange for funding. But those troops movements have been criticised at home as Chadians worry about the growing number of attacks in Lake Chad region.

E/R: Tension In NPP As Philip Addison, Four Other Aspirants ...
41 minutes ago