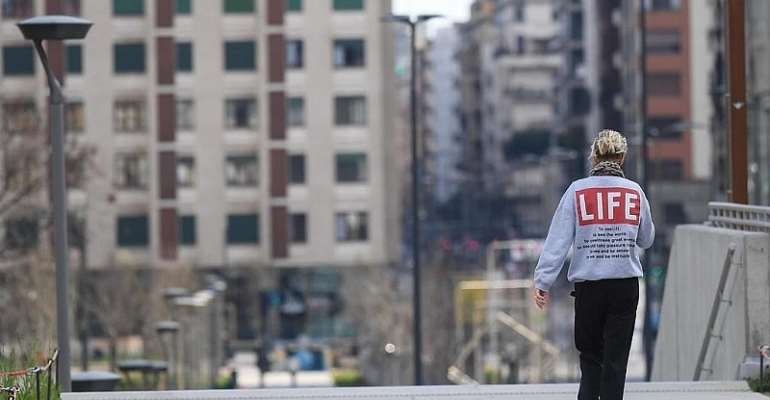 The Italian government reported 793 new coronavirus deaths on Saturday, a new one-day death toll that adds to their overall death toll of 4,825, more than a third of the world's total. The announcement comes as nearly one billion are confined to their homes worldwide.

The world total of deaths climbed on Saturday to more than 11,000 as countries imposed stay-at-home restrictions, closed schools, bars, restaurants and leisure centres. Spain, another hard-hit European country, reported a 32 percent increase in deaths on Saturday.

COVID-19 infections are reported in 164 countries and territories, bringing the infected total to more than 277,106 people.

The World Health Organization warned that while the elderly and frail are especially susceptible to the virus, young people are also at risk.

Restrictions in Europe
In Italy, the death rate is at 8.6 percent as COVID-19 infections rose to 53,578. In the Lombardy region where Milan is located, more than 3,000 people have died.

After a delayed response, Britain has also imposed more stringent measures with the closure of pubs, restaurants and theatres. Switzerland has not followed suit, only banning gatherings with more than five people.

Major cities in US clamping down
The three most populous cities in the US—New York, Los Angeles, and Chicago – have imposed a lockdown, and more cities are planning to follow. Residents are expected to stay home in New York, California and Illinois, and New Jersey, where there is a number of cases, is expected to follow suit.

Non-essential travel between the US and its borders with Canada and Mexico came into effect on Saturday.

China reported no new local infections on Saturday, for the third day in a row, although 41 new infections of people who have returned from abroad has been reported.

Hong Kong logged 48 suspected cases on Friday, as many people have returned home from Europe, possibly bringing the virus with them.

China has offered help to European countries who are scrambling to locate masks; Greece received half a million masks from Beijing on Saturday.

Numbers of infected on the rise
The Democratic Republic of Congo reported its first death Saturday.

Four government ministers in Burkina Faso reportedly were stricken with the virus, while two people died in the country. The government has imposed curfews throughout the country.

The Mauritius Health Ministry said Saturday one person had died.

There are more than 1,000 recorded coronavirus cases on the African continent.

Iran recorded 123 new deaths Saturday but refused to impose restrictions on its people. More than 1,500 people have died and 20,000 are infected.

In Latin America, Bolivia has imposed a stay-at-home order beginning on Sunday, and Columbia said it would start isolation on Tuesday.

Brazil's beaches in Rio de Janeiro will be officially off limits as of Saturday. The country is banning all visitors from Europe, Australia and a number of Asian countries.

Guatemala has allowed food and pharmaceutical production to continue, but most other industries will be required to down tools as of Monday.

Haiti and the Dominican Republic have imposed curfews.