GETfund Scholarship Brouhaha: It Was To Help Me Serve You Better – Adwoa Safo 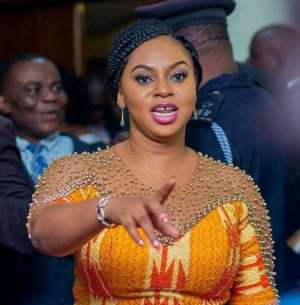 She however not happy with the “tone” of media publications on the matter, which she says, “smacks of an attempt to smear” her reputation as a Member of Parliament (MP) for Dome Kwabenya.

Apart from Ms Safo, the other appointees named by the Auditor-General’s report as beneficiaries include the Executive Secretary of the National Council for Curriculum and Assessment (NaCCA), Dr Prince Armah, who issued a statement saying he was deserving of it; Education Minister Dr Mathew Opoku Prempeh, who also issued a statement saying he benefited from it in 2014 and not as a minister of state; and the Minister of Employment and Labour Relations Ignatius Barfour Awuah, who is yet to issue a statement on the matter.

The revelation has generated outrage among some Ghanaians on social media.

Reacting to the publications, Ms Sarfo said her attention has been drawn to the publications by various media outlets to the “effect that I have received a scholarship from the Ghana Education Trust Fund to study at the Harvard Kennedy School in the United States in 2014.”

She said the “tone of the said publication” was “erroneous and smacks of an attempt to smear my reputation as a Member of Parliament and Minister of State and box me into a self-serving public official.”

The Deputy Majority Leader of Parliament also indicated that the purpose of receiving the GETFund support, “was to attend a programme at the Harvard Kennedy School to enable me to serve my constituents, parliament and nation better” and urged the public to “disregard the said publication and treat it with the contempt it deserves.”