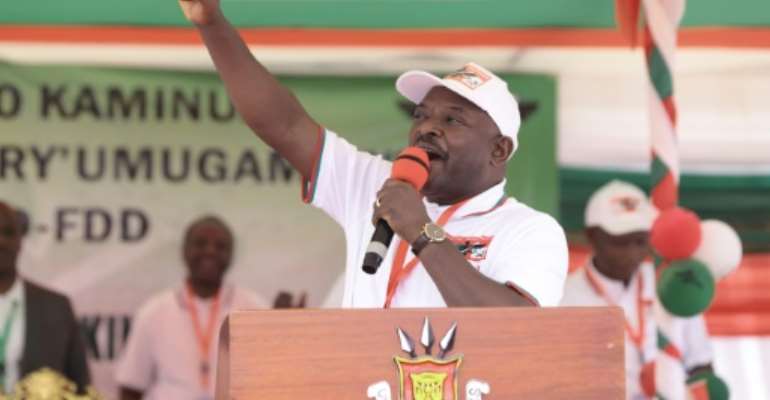 As part of his new role, Nkurunziza will be consulted "on questions about safeguarding national independence, on strengthening patriotism and on national unity", according to the text.

He will also preside over a "national patriotism day" to be held every July.

Nkurunziza's 14 years in power have been marked by accusations of violence and rights abuse -- election-related unrest in 2015 left 1,200 people dead, drove 400,000 from their homes and sparked an inquiry by the International Criminal Court.

Lawmakers stipulated that Nkurunziza would be able to draw on "supporting measures" to help him to carry out the role.

On January 22, legislators passed a law offering a golden parachute to outgoing presidents, including a luxury villa and a one-off sum equivalent to more than half a million dollars.

The retired president will also get the same benefits as a serving vice-president for seven years after he steps down, and will for the rest of his life get an allowance equal to that of a lawmaker.

In 2018, constitutional changes adopted after a referendum had opened the possibility of Nkurunziza staying in office until 2034.

But the 56-year-old announced in December that he would not contest the May 20 election, a move that was greeted at the time by surprise and much scepticism.

Opposition MP Fabien Banciryanino told AFP that he voted against the bill on Wednesday.

"I told (the legislature) that since he has been in power, serious crimes have been committed, each week the bodies of people who have been killed are found, the country has become one of the poorest and most corrupt in the world," he said.

"I think that he should rather respond to these acts before the judiciary."

The ruling CNDD-FDD party has chosen a Nkurunziza ally General Evariste Ndayishimiye as its candidate in the elections.