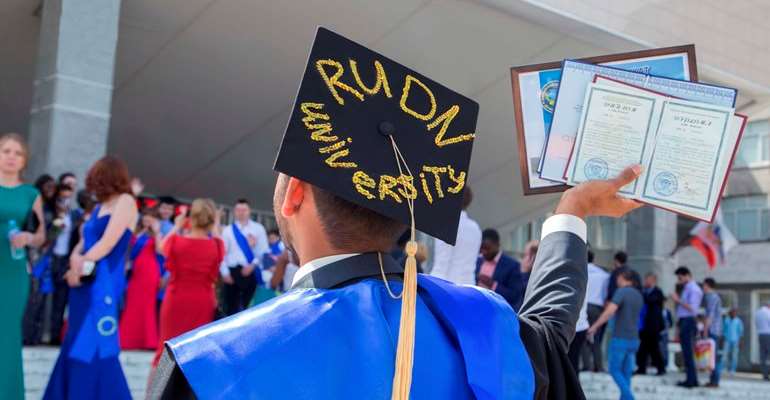 The People's Friendship University of Russia, one of Russia's largest internationally oriented, educational and research institutions, has marked the 60th year of its establishment with series of activities including an evening of congratulatory speeches, culminating with a grand multinational cultural concert in the Kremlin.

The congratulatory messages came from the Kremlin, the Russian government, Federation Council, State Duma, Ministries and Departments, Soviet and Russian Graduates' Associations in Latin America, Asia and Africa, and international organizations such as UNESCO and the United Nations.

From the highest officialdom, Russian President Vladimir Putin sent his greetings to the faculty and staff, postgraduate and undergraduate students and alumni of Peoples' Friendship University of Russia (RUDN) on the academic institution's anniversary.

The message reads: "Exactly 60 years ago, Peoples' Friendship University of Russia opened its doors to young people arriving in Moscow from the newly independent countries of Asia, Africa and Latin America, offering them a second home. I strongly believe that many graduates hold warm memories of the years they spent studying in our country, their teachers and friends.

Over these years, the university has trained tens of thousands of qualified professionals in economics, agriculture, medicine, law, history, philology and other disciplines, making a unique contribution to strengthening friendship and mutual understanding between people of various ethnic and cultural backgrounds.

It is marvellous that the university treasures these traditions and maintains a high standard of education as one of Russia’s best higher education institutions. Its noble mission helps attract talented, proactive and dedicated young people from across the world who are receptive to progressive ideas and are ready to undertake advanced programmes and projects."

In a congratulatory message, Antonio Guterres, Secretary-General of the United Nations, noted that the university has long been known for fostering understanding between countries and cultures.

Respect for diversity is one of the strengths. This anniversary comes at a time of test for that vital work. Today's global landscape is scared by protracted conflicts, a climate crisis and the spread of hatred and disquiet. In such times, the pursuit of knowledge remains more necessary than ever.

It is encouraging to know that the mission of "uniting people of different cultures by knowledge" echoes the aim of key United Nations initiatives, including UN Academic Impact, of which the university is a valued member.

"As we mark the 75th anniversary of the United Nations and embark on a Decade of Action to deliver the Sustainable Development Goals by 2030, we look forward to a continued partnership in shaping a peaceful and prosperous future for all," stressed Secretary-General Antonio Guterres.

Professor Vladimir Filippov, Rector of the Peoples' Friendship University of Russia, traced the history of its establishment emphasizing the fact that the significant decision to establish the university was made 60 years ago. It has worked the way from a higher educational institution, mainly trained staff for developing countries to a comprehensive research university - from Peoples' Friendship University to RUDN University, the scientific and educational centre well-known and recognized in Russian and world rankings.

Today the university brings together students from 158 countries, and the number of RUDN University alumni increases by 5-6 thousand year by year, graduates work in almost all countries.

Professor Filippov concluded: "We are still young, up-and-coming and individual - our university is really the only one. RUDN University is more than just a degree you obtain, more than research, more than collaborations, more than the creative environment. RUDN University generation is beyond standards, we create our own history - history of a university of the new type - We are different, we are equal, we are leaders!"

The stated purpose for establishing the university was to give young people from Asia, Africa and Latin America, especially from poor families, an opportunity to be educated and to become qualified specialists. The organizations, as founders of the university, are the All-Union Central Soviet of Trade Unions, the Soviet Afro-Asian Solidarity Committee, and the Soviet Associations Union of Friendship and Intercultural Relationship.

The university's current Russian name is "Российский университет дружбы народов", which could be translated as "Peoples' Friendship University of Russia" or, more directly, as "Russian University of the Friendship of Nations".

The English-language version of the university's website, however, uses the name "RUDN University" with the acronym RUDN derived from the Russian name transliterated into English ("Rossiiskii Universitet Druzhby Narodov"). Nonetheless, it remains most common in English to use the name "Peoples' Friendship University of Russia" or the abbreviation "PFUR" used in official documents.

*Kester Kenn Klomegah is an independent research writer and policy consultant on African affairs in the Russian Federation and Eurasian Union.