Kofi Kinaata; God Doesn’t Need To Be A Christian For Christianity To Be True. 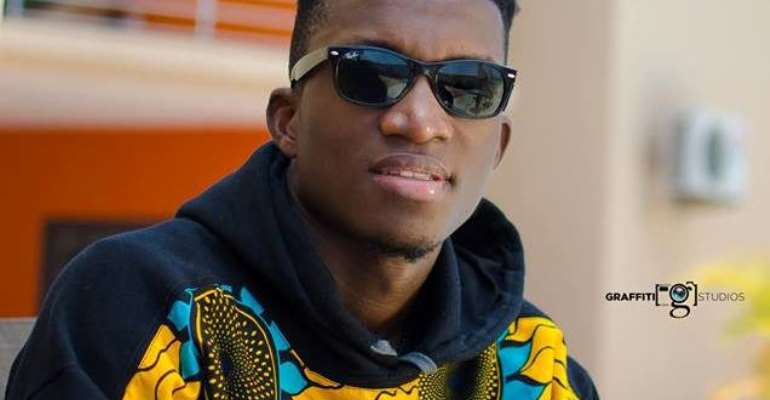 It has been observed that, when young folks get little money and fame, their true self is revealed and they automatically become self-acclaimed philosophers and ‘truth’ bearers. They extend to the public what they think is the truth. The sad thing is that they mostly don’t do any proper thinking and adequate research about certain subjects but are able to make conclusive statements and claims.

One young man who have recently come into the lime light due to his lyrical prose is Kofi Kinaata. Born Martin King Arthur, Kofi hails from Takoradi and is well noted for his Fante rap and freestyle. The purpose of this is to clear certain misconceptions most people especially gullible Christians may have based on the claims made by Kofi.

Recently in an interview on Joy FM, Kinaata made a claim that sought to give reasons why he does not believe in Christianity or why he is not a Christian. He is quoted to have said that “God is not a Christian, God is not a religion, we humans brought religion”. He added that religion is man-made, thus he sees no reason why he should associate himself with man-made religion when he can go directly to God as if God works in isolation.

I think Kofi’s misconceptions or misunderstandings led him to make these statements. In his view God exist but He doesn’t have any religion and therefore he doesn’t identify himself with any religion particularly Christianity.

The claim “God is not a Christian, God is not a religion, we humans brought religion” doesn’t justify Kofi’s conclusion of not believing in Christianity. It is like saying “music is not a musician and therefore I can’t identify myself as a musician” or “Ghana is not a Ghanaian so I can’t identify myself as a Ghanaian”. What then is religion? Religion is an abstract word or a term given to a group of people who possess certain characteristics including the service and worship of a deity and honouring sets of convictions, beliefs and practices. Without people possessing these basic characteristics, there won’t be religion. It is just like culture, without people living and behaving in certain ways, there won’t be culture. Therefore, there can’t be humans living on this earth without religion and culture. Aside from that, religion and culture are intertwined. It’s very difficult to detach the two. Every culture comes with a particular religion seeking to answer life’s big questions; Who are we? Why are we here? Where are we going to? What is truth? Is there life after death? and so on.

One thing Kofi is ignorant of is that everyone belongs to a culture or a religion and everyone worships/honours something. Even atheists who profess the non-existence of God find themselves in some kind of culture and religion honouring something and possessing some beliefs and practices. Once Kofi has some set of beliefs and practices, has some kind of deity he worships or honours, and identifies likeminded people who come together to honour that deity then he has a religion. I am quite sure that Kofi has likeminded friends who hold these views of his, and they do discuss certain beliefs, doctrines and practices, they may consider weird, or problems they do observe in other groups (religions).

It is clear that this statement is absurd and was made without much thought. But let’s discuss further, Kofi seems to be saying that a deity who is being worshipped must identify itself as part of those worshipping or following (religion) that deity. Therefore, when that deity does not identify itself as part of its own worshippers or followers then these worshippers (religions) are man-made. But this again is irrational, an originator can’t be a follower. Jesus Christ can’t follow himself or call himself a Christian (follower of Christ). It rather adherents or believers who would follow him and identify themselves as such. Kofi, we all know you can’t call yourself a Kinaata fan because you are the originator himself. So if this is impossible, why do you think God, the Son, must be called a Christian in order to be certain the faith is not man-made? The possible question Kofi or readers might be asking now is, which God are you referring to? Are people of other faith or religion not worshiping the same God?

The “Which God” Question?

Anyone who asks the “which God” question depicts their misunderstanding of who God truly is. There is only one ultimate being called God. The creator of all things, omnipotent, omnipresent, omniscient, omni-everything pure, holy and infinite. There can’t be two Gods possessing these same powers (same mind, knowledge, understanding, infinite and so on). There is only on one infinite there can’t be two infinites. Also, there can only be one beginning there can’t be two beginnings. Therefore asking the “which God” question assumes there are more than one God which is extremely wrong because God is one. There are demons and evil spirits who are being worshipped as gods knowingly or unknowingly but they are not “Gods”. A loving God who seeks to redeem his creation can’t be a God of confusion and therefore will not give contradictory instructions to his creations. For this reason, it is our responsibility to think through teachings, doctrines and practices of groups which seek to point us to the ultimate Truth or God.

I have heard these unreasonable arguments a number of times. It is especially from people who are either ignorant about these subjects and needs understanding or people who are not ready to denounce unrighteousness or immorality in order to worship the Triune God. It is not surprising the Holy Scriptures states in John 3:19-20 that “…light has come into the world, and people loved the darkness rather than the light because their works were evil. For everyone who does wicked things hates the light and does not come to the light lest his works should be exposed.”

On the other hand, Kofi may be telling us that he can’t be a hiplife musician and identify himself as a Christian. This is because, the values shared by Jesus Christ contradicts his deeds and acts in the music industry. Our television scenes (especially musical videos) are inundated with pride, nudity, vulgar words, alcoholism, pornography and mammon worship etc. The lives of most musicians, actors, and actresses are filled with promiscuity (especially eroticism and fornication). Most of them do not honour the ordained institution of marriage. Any serious regenerated Christian will not be comfortable associating themselves with these shameful acts. But since most can’t live with the cost of diligently servicing the Triune God they stay in these filth and try their possible best to rule out Jesus Christ from the picture to make them feel comfortable to continue sinning.

The most important question Kofi needs to ask himself is, how are the doctrines and teachings of a particular group (religion) going to redeem him from eternal damnation? How is this religion going to transform him from a sinful person to a sinless individual? Can he base on his deprived wisdom and strength to work for his righteousness? Can he live a life pleasing to the Just God without God first transforming his heart of stone into a heart of flesh (as Christianity teaches)?

Which Religion is True?

In order to answer this question diligently, one must be truthful to themselves that they would follow the facts where it lead them. Now, every religion has an originator or a founder. The founder’s actions and inactions are very important to determining whether their teachings and doctrines are true or false. Since God is holy, pure, good, compassionate, loving, and so one, it is very important for the founder of the true faith (religion) to manifest these communicable characteristics. Basing on these, when one compares the founders of all the religions of the world, they will come to a single conclusion that Christianity is true. Because, when you study the life and teachings of Jesus Christ, you won’t reach any conclusion apart from this; Jesus Christ is God and he is the only one who can redeem us. Jesus forgave eternal sins, he was worshipped, he was crucified, he died, he was buried and rose on the third day. Aside from these major events, anyone who wants to know more should read the gospels (Matthew, Mark and Luke) for themselves. These are historical facts and not fictions or myth. There are multiple attestations (both Christian and non-Christian sources) to these. What most people do wrongly is instead of comparing the founders they rather compare the actions of weak or misguided followers to make their conclusions. When this is done, you will never come to a genuine conclusion about which of these faiths is true. You see, I can’t base on the actions of a Kinaata fan to make conclusions about the life and works of you, Kofi Kinaata.

I can go on and on and on but I wish to end here with a little advice to my brother Kofi and readers, please don’t be in hurry to make claims you can’t substantiate. Do your best to study to show yourself approved unto God, learn, research properly and reach truthful conclusions in all your endeavours. Christianity is true, so believe and let Christ be formed in you.