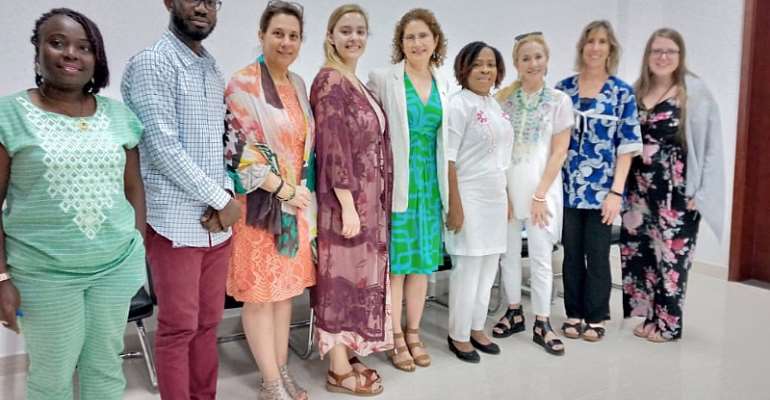 SHE-CAN is a humanitarian organization that anchors on equipping and empowering young women from post-conflict countries to become productive leaders. The US-based organization focuses on low-income young women through Education, Leadership Skills, and Mentorship.

The Thursday, January 16, 2020 meeting which took place at the Ministry's Office

It can be recalled that in November of 2018, a delegation of SHE-CAN visited the Ministry of Gender, Children and Social Protection and informed the Ministry that Liberia was added to a list of post-conflict countries (Cambodia and Rwanda) to benefit annual International scholarships funded by SHE-CAN organization and partners.

Madam Barbara Bylenga the Founder & Executive Director of SHE-CAN said her institution is proud to announce that as of the result of said discussion in 2018 held with the Ministry of Gender, SHE-CAN has concluded extreme academic vetting of female applicants and four successful candidates have met all criteria to acquire fully funded tertiary education in the United States of America beginning this year.

"We as are an organization believe that when women become leaders many of the biggest issues facing countries will be solved", Executive Director Bylenga averred.

The beneficiaries ages from 17-23 years are: Janet Kwenah, Jennifer Maxwell, Shennel Henries and Tarlee Dahn. They will enroll in Lafayette College, Muhlenberg College, the University of San Francisco and Babson College respectively.

Executive Director Bylenga assured the Ministry of Gender that all beneficiaries of the scholarship were made to sign a mandatory form to return home upon graduation to impact the Liberian society.

In appreciation, Deputy Minister for Gender Hon Alice Johnson Howard thanked the She-Can family for providing an opportunity to less privileged females that will harness their full potentials through Education and Mentorship.

Deputy Minister Johnson mentioned that said initiative will buttress the Government of Liberia's Pro-Poor Agenda for Prosperity and Development specifically Pillar One under empowering women and Girls. Pillar One stressed the need to reduce out of school, and increase retention and completion rates for girls.

"Gender would like to re-emphasize that it supports any initiative provided that such initiative is in compliance with the laws of the land and the full protection of fundamental human rights of women and girls", Deputy Minister Alice Johnson Howard concluded.

U/E/R: Ban on all game except grass cutter begins today
35 minutes ago

Gym instructor reveals how married women seduce them during ...
1 hour ago