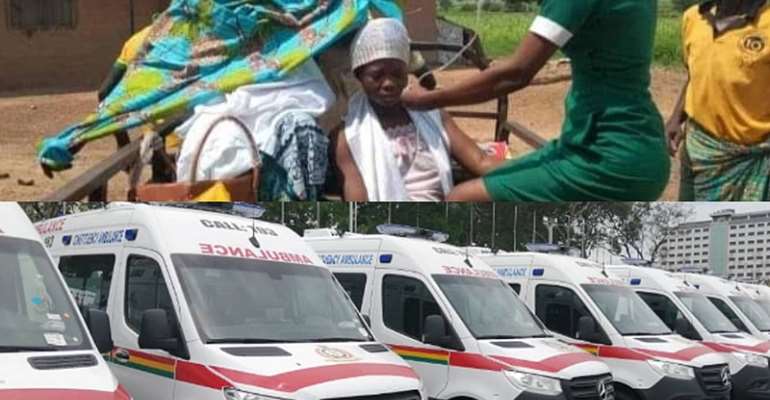 In this episode, writer Nii Larte laments the dilemma of patients following the government's decision to park ambulances meant to save lives again...Let's hear from him....

The people of a country voted for a government that assured that an ambulance for each constituency was in the offing.

The electorate bought into the promise because it was to revamp their ailing national ambulance service and also improve the quality of their healthcare delivery. Three years after the nod had been given; nothing major has been recorded in that regard.

Although some of the ambulances have arrived they're parked at the country's State House. When those in authority were forced to do the needful and distribute them for the time being because patients were in dire need, the citizens were asked to wait for a while.

When they almost thought the moment of joy was near, they rather had to take a pause and prepare for more profuse bleeding. Why? The intended distribution of the ambulances was delayed further without recourse, just 48 hours before the scheduled date. The citizens are now enraged and cannot fathom why. They are yet to come to terms clearly if they had made the right choice due to the listed reasons for the three-week postponement.

Well, you've so far not read parts of your favorite novel; it isn't the script of one of those nice movies either. Guess what? This's actually a real situation currently happening in Ghana where its health sector currently operates a fleet of 55 ambulances for its close to 30 million population. An average of 520,000 citizens who share one ambulance should've enjoyed some respite because the promise to get each of their constituencies an ambulance was to be fulfilled. Shockingly, it 'ended in tears', just to borrow a popular catchphrase in the country at the moment.

A huge doubt has therefore been cast on our seriousness in strengthening our already weak emergency response system as a developing country. After months of pressure mounted on the government to release the 96 out of the 307 ambulances, it says it has procured for distribution, it didn't budge. It defended its decision and cited among other things technical issues that needed to be first addressed. But for me, it was pretty obvious that the political expediency on the part of the country's leaders was at its best display.

It was crystal clear that the government was awaiting the arrival of the remaining ambulances to colorfully commission it as is done by all parties to score their cheap political points. After giving its own timelines and proposing Monday, January 6, 2020, for the 'outdooring' of the ambulances, the Health Minister and the National Ambulance Service two days prior to the event date request more days in a rather interesting twist. How? Nothing new really! The very same reasons for holding onto the distribution of the first batch of ambulances have been given again just that, it has been written on paper in a letter to the President. A clear case that our tolerance as a people in patiently waiting for the needless commissioning has just been taken for granted.

In a country where many rural communities have due to the shortage of functional ambulances been left with no other choice than to use tricycles and commercial vehicles to carry patients who have been referred to other facilities, usually through very harsh circumstances, one will only wonder if the continuous parking and non-distribution of the idling ambulances is to subject patients to more humiliation or normalize the practice. The current turn of event is just deepening the woes and intensifying the plight of pregnant women and many other sick persons who lose their lives as a result of this precarious situation.

In the five-point explanation, the National Ambulance Service argued that issues such as the training of staff and paramedics on the usage of the ambulances and medical equipment as well as an improved state of the art digitized ICT dispatch system needed to be addressed. The other concerns it raised were the installation of tracking devices, the establishment of service centers and the need for the labeling of the ambulances. Couldn't all of these have been done in advance given the crucial services ambulances provide? There was no planning and forecasting, I guess. How does one go to war without adequate training? Why couldn't the training of staff be done earlier? Contingencies in health services are allowed. Provisional plans must be adopted while we improvise and use the ambulances. Ghana's digitization and ICT challenges alone make me cringe and feel the wait for the completion of the technical issues will take forever. Don't think far; name any of our technology services without hitches. Congratulations to you if you found any, the hospitals are not even there yet with digital services so why bother our ambulances with it now?

A local man will not sit unconcerned to be bitten by a snake, likewise, why are authorities justifying the indefensible while people continue to suffer as the ambulances breathe fine air? Let me take you back to the much-touted drone for medical supplies initiative . Though I was not in support, did they not complete all the necessary training and infrastructure with some drone centers established after the grand launch? Even though not all drone centers are ready, the policy is cruising. So what are they telling us? Same cannot be done to the ambulances? Do we have to finish with everything before we hit the ground running? Doing things in a piecemeal approach is not a crime. We should be given a break! Pressure group, Occupy Ghana was just spot on when it described the act as gross irresponsibility on the part of the government.

Those in charge seem to be unfazed about major key issues such as a responsive national response command center and which if not critically examined, will throw the very reason for the operationalization of the ambulances off gear. Issues of recurrent cost, emergency patients' journey, reforming emergency care in the country and even how the government can plan to meet some of its health targets appear to be at the bottom of the list for them.

What we can do

Ghanaians may generally not be angry enough. It is just about the time that the amount of force that led to the cancellation of the national referendum and the dropping of the new parliamentary chamber is exerted on the government to make the parked ambulances move. The media ought to expose how the government by this act is making life for the sick unbearable. It must also make the masses understand the severity and harm the continuous parking of the ambulances is having on healthcare.

More importantly, there is a need to revise our health management service education programs. This current situation brings to bear how those who pass through our health training institutions are being equipped. Does it mean for all this while, no paramedic has been trained to man an ambulance which is an essential machine in providing healthcare? An inclusive training capable of dealing with our health issues on all fronts is one of the many ways forward.

To avert many of these instances, the political determinant of health cannot be ignored. Ghanaians must vote out and demand accountability from any political party that unperturbedly toy with an essential sector such as health. A change in voting pattern and support of realistic policies devoid of partisan colorization will end the shameful flow where 'partisan shenanigans' take us for granted. Pressure groups must not rest on their oars. They should also join in the fight to ensure that our ambulances are released.

It can't end in tears for 'bleeding' patients, why park ambulances again?

In any case, the one constituency, one ambulance will still not be enough to deal with our emergency issues. It is, however, a step towards one end. The ideal case in a perfect system will be for every health facility to possess its own ambulance. So why not distribute and use the few that we have managed to procure to augment our healthcare delivery system rather than sit on this time bomb. Just maybe, there is more to the tales both the Service and the Health Ministry are telling us.

Call it flimsy, untenable, insensitive, embarrassing and sickening, the excuses being given and you will just be right. This is indicative that our government does not prioritize healthcare. These reasons for the non-distribution of the ambulances should be the last thing Ghanaians must be wake up to. Must life not be saved and should the needless deaths not end? Our leaders need to be careful with how the issue of the parked ambulances is being handled. My worst fear? The ambulances are not left to the mercy of the weather, get grounded and rot for the country to lose the huge sums of money it expended in procuring them. Let's think about this; a healthy nation is a wealthy nation. Say it after me! It just cannot end in tears for our 'bleeding' patients, why park our ambulances again?

The author of this piece, Nii Larte Lartey is a Broadcast Journalist with Citi FM/Citi TV

Nii Larte has interests in Health, Education and stories about young people