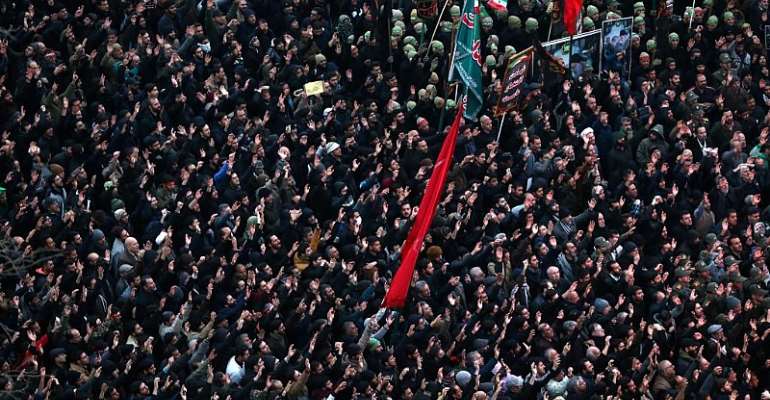 The European Union has urged the Iranian Foreign Minister Mohammad Javad Zarif to come Brussels to discuss a "de-escalation of tension" in the Gulf after a US air strike killed Iran's top general Qassem Suleimani.

In a telephone call, the EU's foreign policy chief Josep Borrell invited Javad Zarif to Brussels for talks on how to diffuse the situation.

Borell warned that a regional political solution was the "only way forward", and underlined "the importance of preserving" the 2015 Iran nuclear deal.

The phone call came as Tehran announced it would finalise a new retreat from the Joint Comprehensive Plan of Action (JCPOA), on Sunday night.

Since the US unilaterally withdrew from the agreement in 2018, Ian has overstepped four stages deal, including a cap on 300 kilogrammes of enriched uranium stockpiles, and a 3.67 percent enrichment level limit.

Switzerland represents US interests as Washington does not have an embassy in the country.

Trump on Twitter threatened to hit 52 targets within Iran – including sites "important to Iran & the Iranian culture" – if Tehran retaliates over the killing of Quds Force chief Qassem Suleimani.

Iranian Deputy Foreign Minister Abbas Araghchi compared Trump's remarks to "the Mongol invasion or the actions of terrorist and criminal groups in the destruction of cultural and historical sites – which is considered a war crime and another breach of international law”.

US troops forced to leave Iraq?
The US assassination of Soleimani risks to backfire as Iraq's 329 seat Parliament is set to vote on Sunday in an emergency session on the 5,200 US troops stationed in the country.

It will need a minimum of 165 votes to pass a resolution to terminate the 2008 Status of Forces Agreement, which would end security cooperation with Washington within Iraq.

Kurdish and Sunni parliamentarians are likely to either boycott the vote or vote against the proposal: Kurds because they are heavily dependent on US support, and Sunni's because they fear that the vacuum left by a US pullout could be filled with Iran-backed Shia forces.