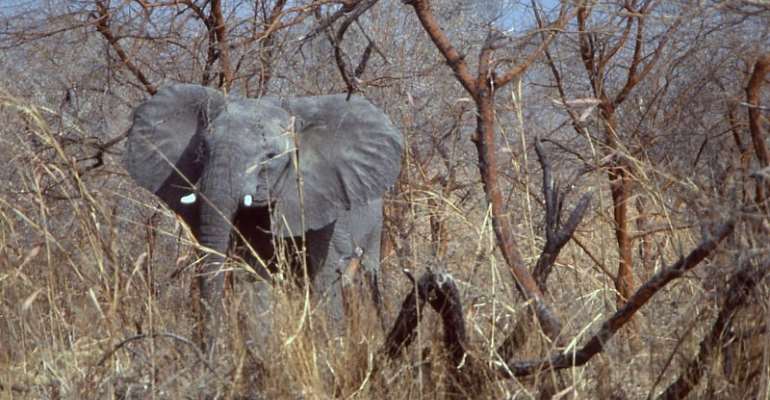 Authorities in Nigeria's Borno State have launched an appeal for assistance from international wildlife conservation experts to safeguard a herd of around 250 elephants sighted in an area where Boko Haram fighters are operating.

“I could not access the exact location where the elephants are because villagers warned that Boko Haram are close by,” explains Peter Ayuba, director of forests for Borno State, who upon hearing news that elephants had been sighted in Kala Balge local government area close to the border with Cameroon travelled to the area on Christmas Day.

The herd was photographed from a helicopter on 19 December during a humanitarian mission to Kala Balge. It is the first reported sighting of elephants in Borno State for over a decade when the Boko Haram insurgency began.

“We need to partner with international conservationists to advise us how to protect these elephants,” says Kabiru Wanori, Borno State environment commissioner and continues. “We do not have the equipment or expertise because it has been a long time since we had elephants in the state.”

Warning shots
Several hundred refugees displaced by the conflict returned to Kala Balge from Cameroon in February this year. Most are living in makeshift shelters or tents and rely heavily on humanitarian aid provided by the government and international organisations.

“Villagers fired warning shots in the air to discourage the elephants from trampling their crops,” says Ayuba. “But just last night the elephants ate the village's entire guinea corn harvest.”

The humanitarian situation was made worse in Kala Balge when Cameroonian authorities authorised the release of flood water from the Lagdo dam in November that resulted in heavy flooding and the destruction of farmland.

“It seems the elephants have migrated here from the Waza National Park in Cameroon, and they may have been displaced by the flooding. Locals have never seen a herd here before,” says Ayuba.

Hundreds of elephants used to migrate through the region up until a decade ago at around the time Boko Haram began fighting to establish an Islamic state. In 2014, Abubakar Shekau's faction of Boko Haram set up camp in the Sambisa Forest that was formerly a game reserve that is 75 kilometres south of Kala Balge.

Three major elephant migration routes passed through the Sambisa Forest. These same routes, that follow water sources, are used by insurgents to escape military bombardment. The heavy exchange of artillery fire between the military and the insurgents drove most of the big game away from the reserve.

“Elephants don't like gun shots, so the fact they are in an area where insurgents operate suggests they are disorientated,” explains Ayuba who was the chairman of the elephant task force in the state 15 years ago. “We have written a memo to the state government requesting financial assistance to buy devices that simulate sounds elephants are afraid of to keep them off farmland.”

Porous borders
Kala Balge local government area has long been a flashpoint in the war against Boko Haram. On 14 May 2014 local vigilantes ambushed and killed around 200 insurgents. Two weeks later Boko Haram retaliated killing 40 vigilantes that led to villagers fleeing across the border to Cameroon.

Boko Haram have exploited Nigeria's porous borders with Cameroon, Chad and Niger to launch attacks and then retreat. In October the Borno State governor Babagana Zulum employed around 1,000 hunters to help the Nigerian military to protect the civilian population and to survey the borders.

“It is unlikely that the elephants will be killed by hunters or by poachers because the smuggling networks that were rampant a decade ago have been broken up by the insurgency,” concludes Ayuba.

A 2016 National Geographic Report found that several armed groups in Africa profited from the trade in Ivory, including Boko Haram.

Galamsey Saga: All Missing Excavators Would Be Brought Back ...
44 minutes ago