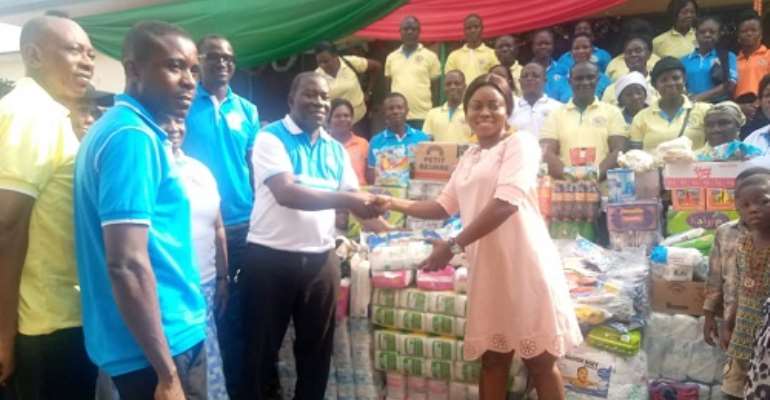 The Calvary Temple Assemblies of God at Bantama in the Kumasi Metropolis have donated household items worth thousands of Ghana cedis to the inmates of the Kumasi Central Prisons and Kumasi Children's Home to support and put smiles on the faces of the less privileged in this festive season.

The donation formed part of the Church’s social responsibility to the society and the activities marking their 40th Anniversary celebrations.

Presenting the items on Saturday December 28, 2019, the Resident Pastor of Cavalry Temple Assemblies of God Bantama Pastor Peter Owusu Mensah said the gesture was to extend the love of Christ to the inmates and give them hope and also supporting the needy and vulnerable in the society.

He added that the move was also to visit and interact with the inmates and assess how best the church and other entities could come to the aid of the inmates.

Pastor Peter Mensah explained that the church saw the need to observe and celebrate their anniversary with the needy and vulnerable in society.

He noted that the gesture was in line with Jesus’ demand on Christians to give to the poor, visit the sick and prisoners among others, as recorded in the Bible.

He urged others in society to make it a point and support the needy in any means to help relief them from their ordeals.

He added that the church which begun it's meetings at the Philips Commercial school with about 20 members.

He stressed that the 40th anniversary is a great reminder for the current leadership of the church to work hard and win more souls for Christ as their predecessors had to invest their lives to put the church on a good footing.

It was all joy for the inmates of the Kumasi Children’s Home and the Kumasi Central Prisons when they tasted the benevolence of the church and in unison, thanked the them and glorified God for his faithfulness.

The Assistant Supervisor at the Kumasi Children's Home received the items and thanked the church for their kind gesture.

She called on cooperate organizations to come to their aid to complement the efforts of the government at the center.