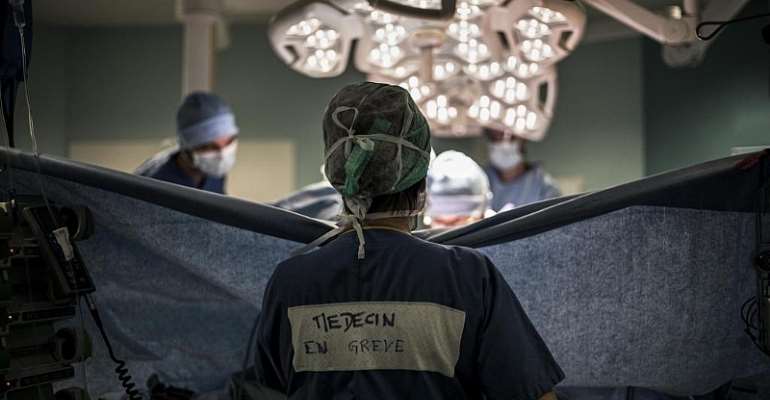 French hospitals are "dying". That's the warning from more than 600 doctors who are threatening to resign unless the government negotiates with them to solve the crisis. On Tuesday, doctors will join other public and private sector workers for the third nationwide strike against pension reforms.

"Due to a lack of funding enabling us to provide quality treatment, guaranteeing patients' safety, we have no choice but to start a "disobedience movement," some 600 doctors wrote in an op-ed published in the JDD newspaper on Sunday.

Faced with temporary beds, angry patients, and staff shortages, the men and women in white coats say they've had enough and want an emergency debate on public hospital services with a real plan that shores up funding and staffing.

"The hospital is dying and the health minister is giving only palliative treatment," they said.

They acknowledged that the health minister, Agnes Buzyn, has spoken about compassion, but regretted that no meaningful funding plan followed.

"Last year, for the first time in ten years, the public hospital budget increased," came Buzyn's response. But many doctors have yet to see the immediate effect of the budget announcements, she admitted.

Ongoing protests
Emergency department staff have been striking since March over their poor working conditions and on Tuesday, thousands are expected to march on the streets of Paris yet again joining a wave of strike action against government pension reforms.

The ongoing industrial action has meant that only a third of emergency services in France are actually running.

The long duration of the strike has raised concerns about patients' safety. However, for general practitioner Jean-Paul Hamon, who also heads the Federation of French doctors, staff have been left with little choice but to walk out.

"GPs want to be paid for their work. And we want to do away with this notion that it is ok for a GP to work 55 or 60 hours per week. We want the right to a normal life like everyone else. We want our weekend work to be recognised," he told RFI.

In response to the protests, the French government unveiled plans back in June to pump 750 million euros into the health system.

So where did the money go?
Most of it was used to fund an emergency 100-euro pay rise for hospital staff. But staff said it was insufficient. They wanted 10,000 additional personnel – and a 300-euro pay rise, followed by an end to cuts to hospital beds.

The austerity cuts are part of efforts to alleviate the huge debt faced by many French hospitals.

The government has now said it will take on some of this burden – 10 billion euros in fact.

But for one male nurse from Saint Antoine hospital in central Paris, government debt relief doesn't solve the day to day problems many doctors and nurses face.

"We're facing serious staff shortages. And the patients see this. We spend less time in their room, we have less time to treat them. We have to work quicker, with less means and less staff, so it is difficult to give them the service they need," he told RFI.

Under strain
France's strained system was put in the spotlight in October amid a bronchiolitis outbreak, when 22 young children, most of them under the age of one, had to be transferred for treatment to hospitals in the provinces due to a lack of beds in Paris.

Never before have so many children had to be transferred from the capital at one time. The last time such a transfer took place was thirty years ago, and even then, only three children were moved.

Medical unions doubt they will be able to attract as many striking doctors on Tuesday as they did last month, when 10,000 health workers walked out.

"We are conscious that it will be difficult to mobilise health workers again," said Anne Gervais, co-founder of the Inter-Hopitaux group leading the strike, citing the toll that months of strike action has already taken on them.

In addition, metro lines and bus services are still affected by the transport strike in Paris.

Nonetheless, unions are determined to push on with their demands for a Marshall plan to save the public health service.

Since 10 December, junior doctors have joined the movement, with the union Isni calling a national protest for 20 January over "the degradation of care" and the dire state of the hospitals where interns work.