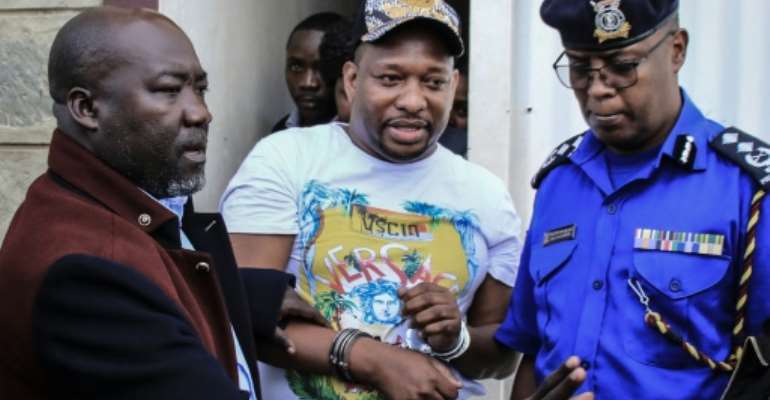 Governor of Nairobi, Mike Sonko(C), was arrested for alleged financial crimes. By - (AFP)

Nairobi's gold-flashing governor posted bail and was freed from custody Wednesday after his dramatic arrest on corruption charges saw him become the latest top official nabbed for graft in Kenya.

Mike Sonko, whose penchant for flashy jewellery and cars has come under scrutiny, paid 15 million Kenyan shillings (USD$147,500/133,000 euros) to secure his release under bail terms handed down by an anti-corruption court.

"Mike Sonko is free. We have processed his cash bail," a court clerk told AFP late Wednesday after magistrate Douglas Ogoti ordered he raise the money, or a larger bond plus surety, for his release.

Sonko -- who has spent time in jail for failing to respect court dates -- is accused of having benefitted from irregular procurement and payments of $3.5 million.

He plead not guilty Monday before a packed courtroom to more than 30 charges of money laundering, taking bribes and conflict of interest.

The maverick politician, whose self-given name "Sonko" is slang in Swahili for a rich and flamboyant person, scuffled with police as they served him an arrest warrant last week.

He was bundled into a helicopter, flown to Nairobi and bussed to jail.

It was another attention-grabbing moment for the unconventional leader known for his expensive diamond jewellery, fleet of gold-coloured cars and on occasion, golden shoes.

He recently drew criticism for displaying his opulent dining room on social media, but is beloved by poor Kenyans for running his personally branded fire trucks and ambulances to assist people living in the slums.