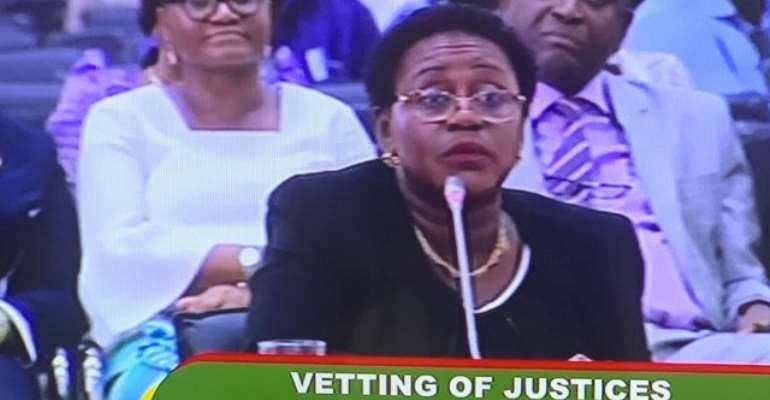 A Supreme Court judge-nominee, Gertrude Torkornoo says the judiciary has more work to do to purge itself of corruption tag.

While 57 percent of Ghanaians interviewed in a recent report alleged that the police is the most corrupt institution in Ghana, 40 percent pointed to judges and magistrates as the second most corrupt. Members of Parliament (MPs) followed the list with 36 percent.

The report further indicated that, even though the government has always insisted it's leading a successful fight against corruption, more than half of respondents believe that the level of corruption in the country has increased and government was performing poorly in the fight against the canker.

Media outlets were flooded with politicians and Members of Parliament coming out to reject and defend the report. The Ghana Police Service, the institution that continues to top the list, remained silent on the development.

But responding to questions at her vetting on Tuesday, December 10, Justice Gertrude Torkornoo argued that corruption is not only limited to the judiciary and therefore there is a need for a national conversation on how to deal with the canker.

“The findings, I thoughts were misrepresentation if not unfortunate. I think that when it comes to corruption we are dealing with a national matter and we should have enough arrangement.

“So you would go to go to a public figure and try to give him something. That behaviour also impacts on how we are conducting business in the public space. What we need as a country, that is all of us, is to have a stern conversation around corruption.

Appeals Court judge, Justice Gertrude Torkonoo on Tuesday, December 10 met the Appointments Committee of Parliament for her vetting as a Supreme Court judge.

Madam Gertrude Torkonoo, together with Justice Mariama Owusu and Justice Avril Lovelace-Johnson were nominated by the President, Nana Akufo-Addo last month, to replace Chief Justice Sophia Akuffo, Justice Vida Akoto Bamfo and Justice Sophia Adinyira who are due for retirement by close of year.