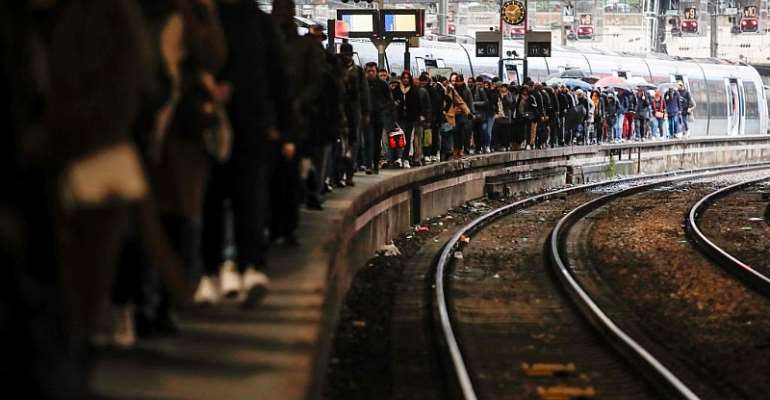 Strikes once again disrupted commuter traffic across France on Monday as the government prepared to unveil details of a controversial reform of the country's pension system.

Commuter traffic was heavily disrupted in the Paris region and across France on Monday, the fifth day of a strike affecting public services as workers continue to protest impending reforms to the retirement system.

All but two of Paris's 16 metro lines as well as the RER suburban trains were heavily disrupted, and up to 600 kilometres of traffic jams, more than twice the normal level, were measured as commuters sought to drive to work in torrential rain.

Only about one in six trains around the country was operating and some international lines were disrupted as well, including the Eurostar service to London and the Thalys to Brussels.

Commuter patience and support to be tested
With strikes expected to continue, disrupting transport and forcing school closures, the coming days will be a test of public support for striking workers.

The Sunday newspaper Journal du Dimanche published a poll showing 53 percent of respondents supported the strike or expressed sympathy with the strikers' demands.

But many employees opted to work from home during the first days of the strike last Thursday and Friday, and how well they will manage the return to the office this week will help gauge the level of public support for the strike.

Business owners have already expressed concern over disruptions to the year-end shopping season for a second year in a row, after unrest caused by Yellow Vest protesters took a toll on retail sales in late 2018.

Unions strive to mobilise workers
The week will also test the ability of trade unions to continue mobilising striking workers.

Over 800,000 people marched in streets around the country when the strike was launched last Thursday, with many accusing President Emmanuel Macron of trying to weaken France's social safety net.

In addition to the ongoing strikes in public services, two nationwide strikes have been called for Tuesday and Thursday, bookending the government's plans to announce details of the proposed reform on Wednesday.

So far, the strikes have been called by the more hard-line federations of trade unions, including the CGT, with moderate federations – including the CFDT, the largest union by membership – preferring to wait until the government has made its proposals before deciding whether to call its members to strike.

If Macron manages to win over the reform-minded CFDT, it may be enough to contain a longer-term social movement and avoid a situation already being compared to 1995, the last time a French government tried, and ultimately failed, to reform the country's pension system.

Test for Macron
The week will test the resolve of the French government to honour Macron's key campaign promise to overhaul the pension system, as well as its ability to convince the public that its vision of how to do so is in the country's best interest.

Macron says the reform is a necessary part of the social and economic modernisation that France needs to see through if the country is going to compete with China and the United States. But the pension system is a key pillar of France's welfare state, and any proposals to change it are bound to raise challenges to the government.

Macron held an emergency meeting with top officials on Sunday to work out a strategy for the coming week, when the government will detail plans about what actual reforms it intends to make.

The government has already indicated it wants to replace 42 separate pension plans – including advantageous schemes known as régimes speciaux or special regimes that allow workers in some professions to retire early – with a single points-based system with equal rights for all pensioners.

Officials argue the current system is unfair and unsustainable, while critics fear the reform will require people in the public and private sectors to work longer for smaller pensions.

The government has not proposed to raise the retirement age of 62, but its proposals are expected to encourage people to work longer to qualify for more advantageous pensions.

Jean-Paul Delevoye, a politician appointed by Macron to pilot the reform of the pension system, was to meet union leaders on Monday before submitting his proposals to Prime Minister Edouard Philippe in preparation for Wednesday's announcements.