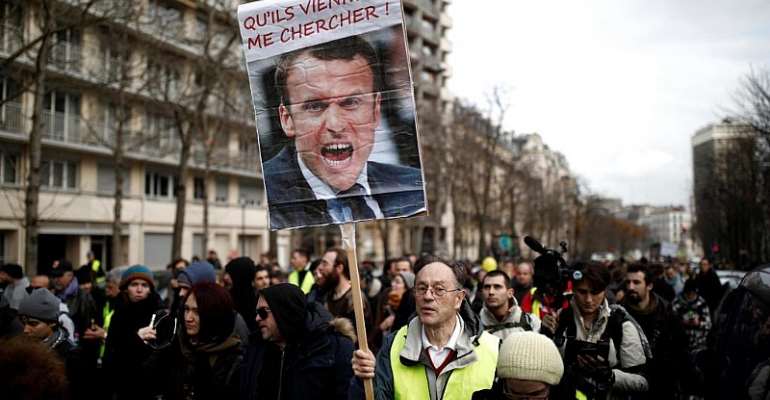 France's main rail workers' unions have warned of more strike action over the coming days, as thousands turned out in the streets to show their anger over the government's pension reforms. The Yellow Vest movement, now in its 56th week also joined in, while elsewhere, truck drivers blocked major roads.

After a meeting on Saturday morning, the three main trade unions representing workers at the national SNCF train service (CGT-Cheminots, l'Unsa ferroviaire and SUD-Rail) called for another major day of strike action on Tuesday.

For the last three days, they have been calling for President Emmanuel Macron's government to scrap the proposed pension plan based on a point system, which it says is fairer.

Protesters gathered in cities across the country, for example in Nantes, where some clashes with police were reported.

"We haven't seen protesters this determined in a long time," said one Twitter user.

Unions say Macron's proposal for a single pension system would force millions of people in both the public and private sectors to work well beyond the official retirement age of 62.

Prime Minister Edouard Philippe is due to unveil the finer points of the reform next Wednesday.

"We call for the movement to intensify from Monday to make it clear that we want the plan to be withdrawn," said Laurnet Brun, the head of the CGT rail worker union.

The SNCF rail operator has warned that disruption at the weekend will be at the same level as the last two days with just 10-15 percent of high-speed and regional trains running.

Act 56
The Yellow Vest movement, or 'Gilet Jaunes' also held their 56th Saturday protest against what they say are growing and glaring economic disparities between the capital and the smaller cities and towns all across the country.

In the south of Paris, a few light clashes occured between protesters and police which momentarily disrupted the advancing demonstration.

Fuel tax
Adding their voice to the protests were truck drivers who blocked highways from Provence in the southeast to the northwest in Normandy.

They were speaking up against a proposed 2 cent rise per litre on diesel prices, a similar measure that sparked the Yellow Vests movement last year.

The Truckers federation OTRE (Organisation des Transporteurs Routier Européens) said it opposed such an increase on diesel for commercial vehicles as part of the government's draft 2020 budget.

"Our movement is a movement of rage against the continued fiscal punishment of road transport that we can no longer tolerate," Alexis Gibergues, OTRE's president in the Ile-de-France region around Paris, said on LCI television.

He added their protest is not targeting city centres for the moment, but that may change if the government does not respond.