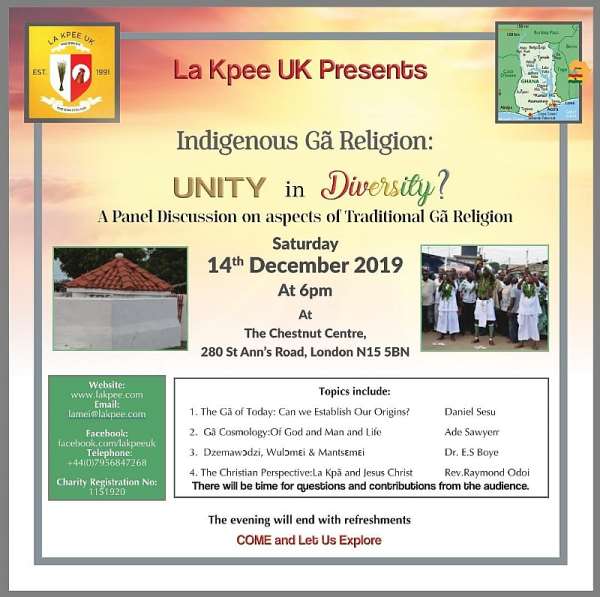 One theme runs in all the great religions including African indigenous religion and that is, there is one Supreme Being, divine beings, human beings, God the almighty and divinities as its base support. In Christianity for example we have God the father God the son and God the spirit, we also have the saints. African traditional religion also believes in the concept of one almighty God with our ancestors as intermediaries between us and God.

In Ga traditional religion ,it is believed that God can be communicated to through the ancestors – those who have died, just like what happens to Christianity through Jesus. This is one of the issues which Christianity has misunderstood African Religion so that they have always wanted to influence African Religion. While at the same time they are the same valuable elements, which are used in Christianity.

At the apex of the Ga religious belief system is the Supreme Being: a personified creative life force that the Ga has termed Ataa Naa Nyongmọ. Thus the Gas believe in divine beings or spirits of nature (dzemànwọdzi). According to the belief system, these are sky-dwelling spirits associated with certain topographical features such as the ocean, lagoons, rivers, mountains, etc: which are thought to be the natural habitation or places of descent for these dzemànwọdzi.

Consequently, the Ga regard the dzemànwọdzi as intercessors or mediators between humanity and Ataa Naa Nyongmọ for the protection and blessing of the living, and the future generation of the Ga people. Whereas, the dzemànwọdzi are believed to be the most important intermediaries in the affairs of the Ga, ancestral shades on the other hand, equally play an important role in the lives of their descendants by liaising between them and the dzemànwọdzi when the need arise.

What Christianity has failed to understand is the reason why African Religion venerates and not worships the ancestors. Actually African Religionists have said that “we do not worship ancestors, we remember them and thank them”. Veneration is honoring the ancestors and their spirits. This is one of the values, which are similar to Christian denominations like the Roman Catholic, and the Anglican churches do the veneration when commemorating the saints. These are believed to play a similar role as intermediaries and are believed to be closer to God who is the Supreme and Supernatural Spiritual Being.

This year, instead of La Homowo in London, the executive have decided to hold a commemorative panel discussion on the above topic to be held at The Chestnut community centre, 280 St Ann’s Road, London N15 5BN.

Saturday 14th December 2019 at 6pm
The Topics Include
The Ga of Today: Can we Establish Our Origins? By: Daniel Sesu

Ga Cosmology: Of God and Man and Life By: Ade Sawyer

Off course, there is no single answer to these questions and concepts, which is why we are going to explore and learn from the panelist and the audience.

There will be lavish reception after the panel discussion.

All are cordially invited.
By C.A. Ollennu